A year after the electoral victory of the Pakatan Harapan coalition, authorities have failed to reform repressive legislation or expand civic space, and continue to restrict fundamental freedoms and silence dissent, a new briefing from ARTICLE 19 and CIVICUS said today. 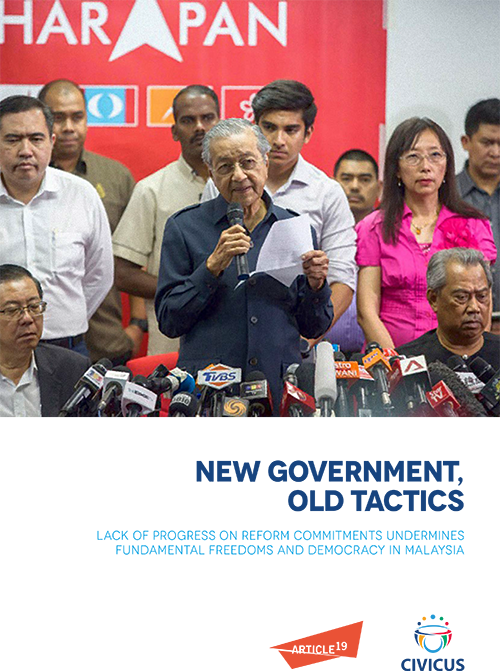 The briefing, “New Government, Old Tactics: Lack of progress on reform commitments undermines fundamental freedoms and democracy in Malaysia”, concludes that, despite some encouraging early steps by Malaysia’s new political leaders, broader reform processes to protect human rights have ground to a halt. The Pakatan Harapan coalition has not followed through on commitments in its campaign manifesto to reform repressive legislation, including the Sedition Act 1948, Communications and Multimedia Act 1998, Printing Presses and Publications Act 1984, and Peaceful Assembly Act 2012. Instead, authorities have used these laws to harass and prosecute activists, government critics and others exercising fundamental freedoms.

“The Pakatan Harapan government came to power on the back of promises to reform repressive laws and open up public spaces that have long been restricted by the previous regime. Instead, authorities have used the same old laws to silence critics, stifle unpopular opinions and control public discourse. These retrogressive tactics blemish the supposed reformist credentials of Malaysia’s new leaders, and impede the democratic transition that they promised to bring about,” said Nalini Elumalai, ARTICLE 19’s Malaysia Programme Officer.

While welcoming steps to establish a self-governing media council, ARTICLE 19 and CIVICUS are concerned about that the lack of progress in reforming restrictive laws that impede press freedom and the ability of journalists to report without fear of judicial harassment and criminal penalties. Further, there has been a lack of transparency in legislative and institutional reform processes, with limited opportunities for meaningful participation by civil society and other stakeholders. The decision by authorities to place the report of the Institutional Reform Committee under the Official Secrets Act (OSA), preventing its release to the public, underscores these concerns.

ARTICLE 19 and CIVICUS’s review of the government’s record during its first year in office reveals continued restrictions on the right to peaceful assembly. Those involved in peaceful protests, including students, women’s rights activists and indigenous activists have been arbitrarily detained, threatened or investigated, while the Peaceful Assembly Act has yet to be amended in line with international law and standards. Further, the government has failed to follow through on manifesto promises to create an enabling environment for civil society and to review laws and policies that restrict the registration and operations of NGOs.

“The government must halt the judicial harassment of demonstrators for exercising their right to the freedom of peaceful assembly and instruct police officers that it is their duty to facilitate peaceful assemblies, rather than hinder them,” said Josef Benedict, CIVICUS Civic Space Researcher. “Immediate steps must also be taken to review the Societies Act to guarantee that undue restrictions on the freedom of association are removed,” Benedict added.

The Pakatan Harapan government faces tremendous challenges in dismantling the repressive legal and institutional framework built during 61 years of Barisan Nasional rule. ARTICLE 19 and CIVICUS understand that opposition forces are determined to undermine progressive reforms in Malaysia. Nevertheless, we urge the government to follow through on its promises and undertake a comprehensive, transparent and inclusive process of legislative and institutional reform to promote and protect fundamental rights and freedoms. Failure to act with urgency, resolve and principle in this regard will lead to the entrenchment of restrictions on civic space and call into the question the government’s commitments to fundamental freedoms.

The CIVICUS Monitor, an online platform that tracks threats to civil society in countries across the globe, rates civic space – the space for civil society – in Malaysia as ‘Obstructed’