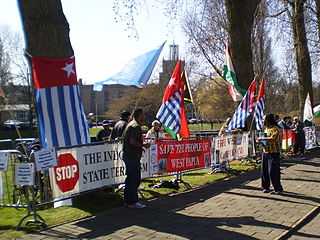 West Papua is a former Dutch colony that was placed under Indonesian rule following a United Nations-supervised referendum in 1969, which many believe to be fraudulent.

The rallies were held to mark the 57th anniversary of the raising of the Morning Star flag - a banned symbol of Papuan independence – to declare independence from the Netherlands.

Global civil rights group, CIVICUS, says the arrest of at least 500 activists highlights the continued repression against peaceful pro-independence activism in West Papua and the ongoing impunity for these violations.

According to reports, peaceful demonstrations took place in several locations in West Papua as well as other cities across the country including the cities of Jakarta, Surabaya, Palu, Kupang, Makassar, Manado and Ambon. Most of the arrested have been released.

In Surabaya city, which saw one of the biggest rallies, protesters were allegedly attacked by pro-government nationalist groups leaving at least 17 injured.

“The weekend arrests of hundreds of West Papuan activists solely for their peaceful political expression is outrageous and another attempt to silence their ongoing demands. Despite continued promises by President Joko Widodo to address the grievances of West Papuans, all they have faced time and time again are repressive actions by the Indonesian security forces” said Josef Benedict, CIVICUS civic space researcher.

There have been long standing demands by West Papuan groups for independence due to the exploitation of land and resources and serious human rights violations in the region. Over the decades, the Indonesian security forces have responded brutally with reports of unlawful killings and unnecessary and excessive use of force and firearms during peaceful pro-independence protests and gatherings.

Political activists and others accused of links to pro-independence groups have been tortured or otherwise ill-treated during arrests. Most recently, in September 2018, at least 67 Papuan student activists were detained by the police for participating in at least three protests in Jayapura..

“The international community, especially countries in the region, cannot continue to stay silent on the abuses in West Papua. It must push for an end to the suppression of fundamental freedoms there and call for a genuine dialogue between the government and West Papuans to resolve the situation in the region.” said Benedict.

CIVICUS has called on the Indonesian government to respect the right to freedom of expression and assembly and take the necessary steps to ensure that all police and military personnel who have been involved in human rights violations in West Papua are held accountable. The government must also take measures to ensure that local human rights defenders and journalists are protected and that international human rights organisations, journalists and the UN are provided unimpeded access to the West Papuan region.

The CIVICUS Monitor, an online platform that tracks threats to civil society in countries across the globe, rates civic space – the space for civil society – in Indonesia as obstructed.