We are delighted to announce the finalists of the 2018 International Youth Day Creative Symposium! After a very difficult selection process, thirteen amazing young artists were selected as finalists to get the chance to be featured in the 2018 State of Civil Society Report and receive a cash prize of $300 USD can be donated to the organisation or cause of their choice.

To help them win, please vote for your favorite artist before August 11 noon (SAST).  The online general public vote will represent a 40% of the final evaluation score to select the top 2 in each category. The remaining 60% will be decided by our judging panel.

And the finalists are:

Democracy is a system for the people by the people. Today, in my encounters, one thing I hear a lot are complaints by youth about the million things that are wrong with the world while they themselves are doing nothing. Usually, that's the case because they feel they can't do anything. The piece I wrote title "Chave Mestra" [Master Key] tells them just the opposite. It's a message for youth to reimagine democracy by seeing themselves as the master key, the key to solve any if not all issues we face. By considering the fact that if we aren't the solution we're the problem we reimagine democracy by offering ourselves as solutions to the many problems. 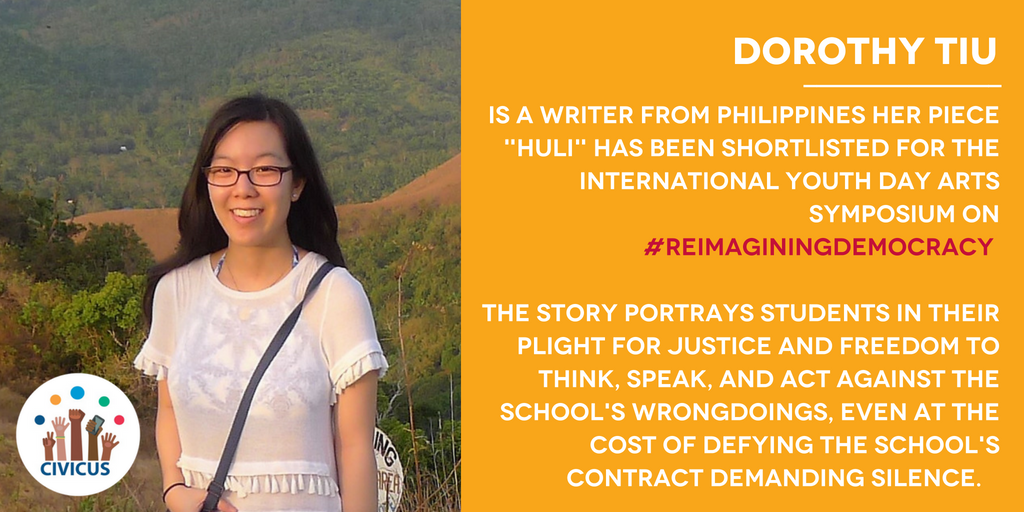 A controversy ripples through campus over a gang rape incident that left one student dead, one victim charged for murder, and one offender left off the hook with a mere warning. As the school struggles to bury the story under wraps, two boys sculpt their vision of modern-day Justicia for a gallery at the opening of their school's new fine arts building. They call their statue "Huli"- a soldier for the silenced, a guardian of free-thought, and a symbol of courage. The story portrays students in their plight for justice and freedom to think, speak, and act against the school's wrongdoings, even at the cost of defying the school's contract demanding silence.

Gabriel Karsan: “Freedom of Not” 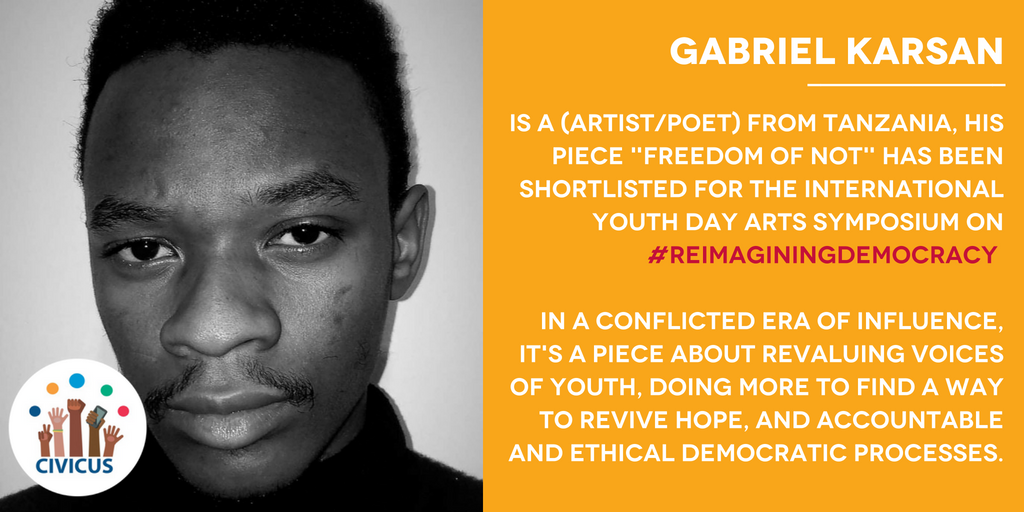 In a conflicted era of influence, it's a piece about revaluing voices of youth, Doing more to find a way to revive hope, Accountable and ethical democratic process. 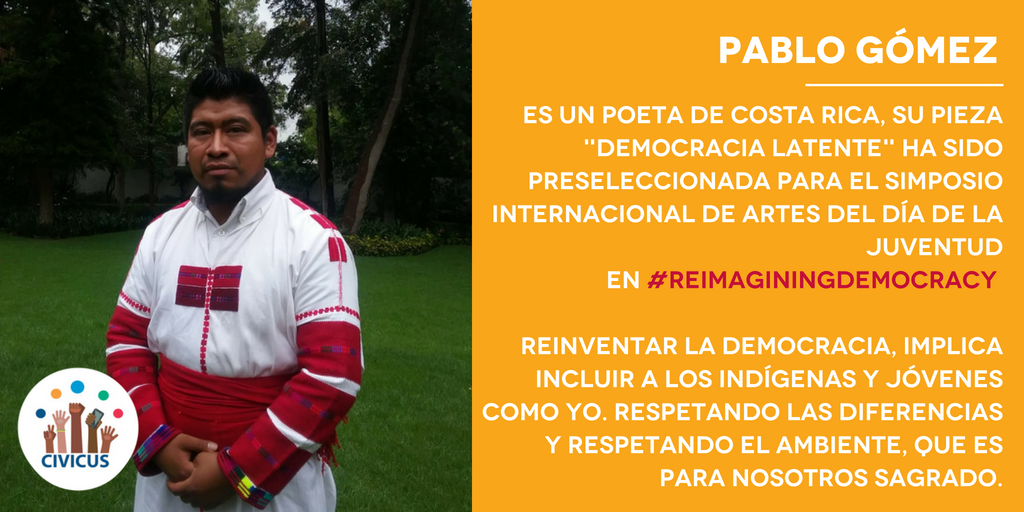 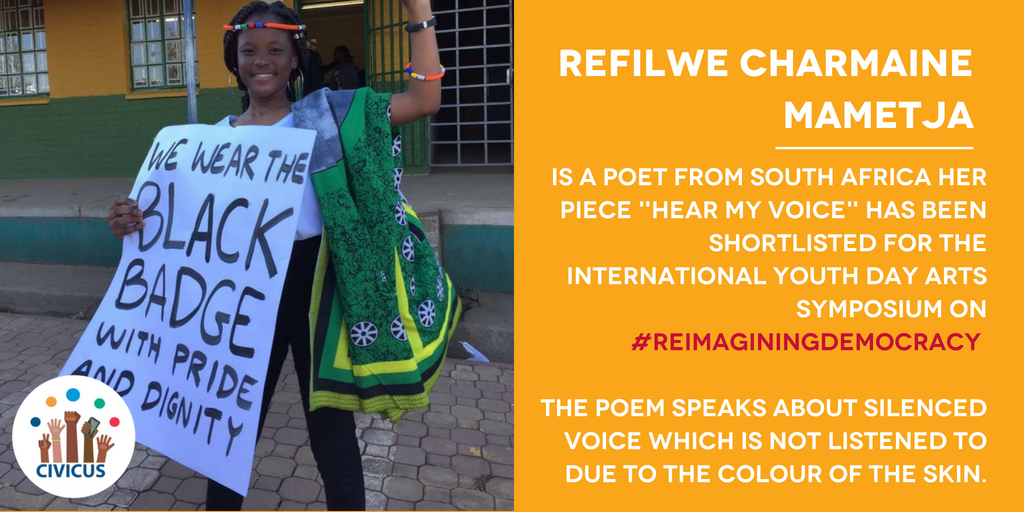 The poem speaks about silenced voice which is not listened to due to the colour of the skin.

Maxim Liho: “We Are One” 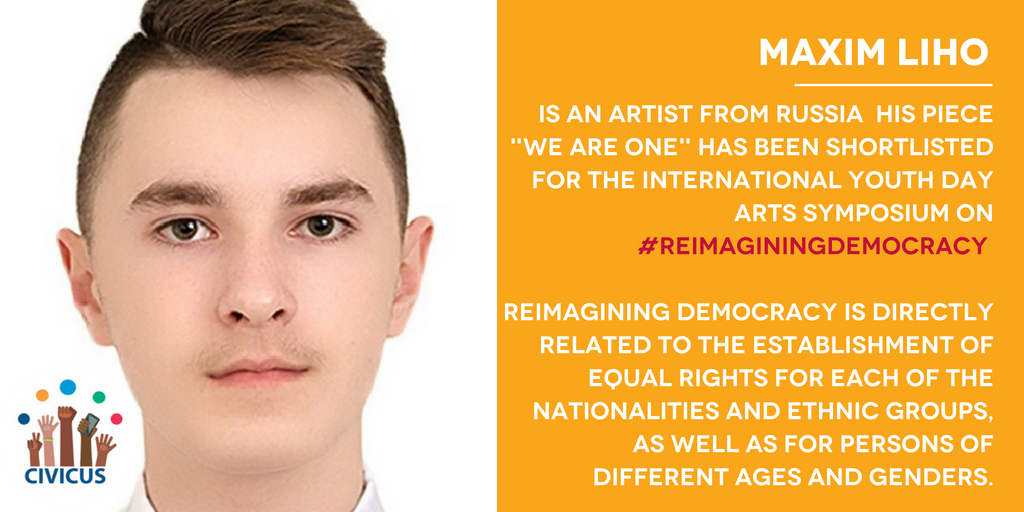 Equality for all national groups is an integral part of democracy. A free society is characterized by a tolerant attitude of people to each other. Therefore, reimagining democracy is directly related to the establishment of equal rights for each of the nationalities and ethnic groups, as well as for persons of different ages and genders. I think that my picture reflects this value and conveys the importance of eliminating the problem of inequality throughout the world. 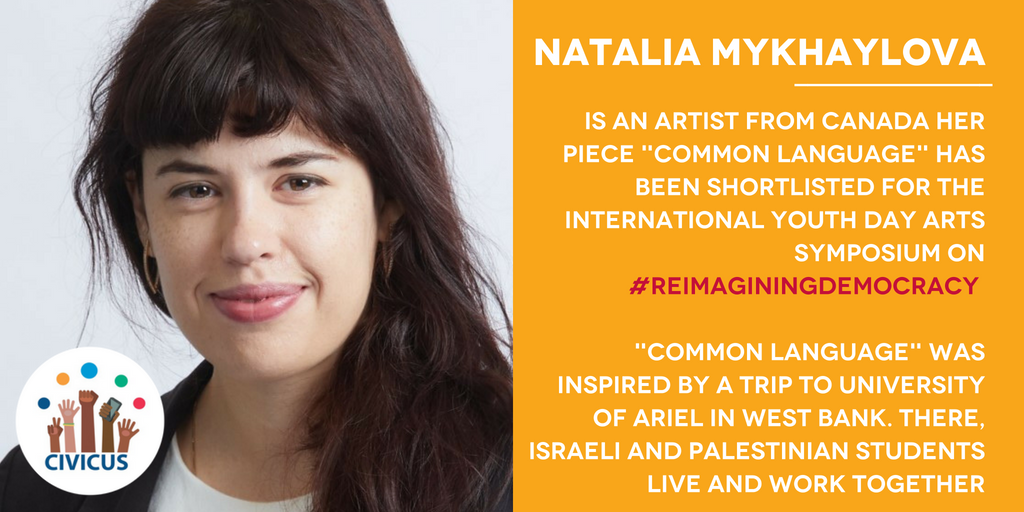 The inspiration behind the work is the impact we have on society and the society has on us form my perspective as a young person. The work makes use of photography, digital editing and mixed media to convey the message directly and tangibly based on my travel experiences. "Common language" was inspired by a trip to University of Ariel in West Bank in Israel. There, Israeli and Palestinian students live and work together and achieve high level of success in building startup companies where founders are from Israel and Palestine, despite the conflict between regions. The people there pride themselves in how their collaboration leads to success despite all the cultural and religious barriers. The work was also inspired by the story about the tower of Babel and the importance of finding the common language to build something successful. 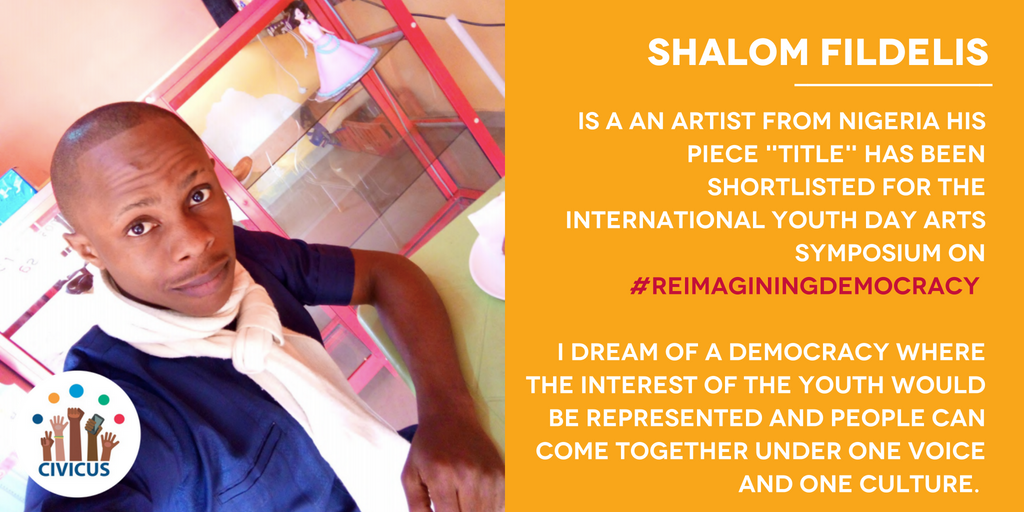 I dream of a democracy where the interest of the youth would be represented, where misunderstanding and miscommunication which courses barriers in language, religion and ethnicity would be broken and people can come together under one voice and one culture. 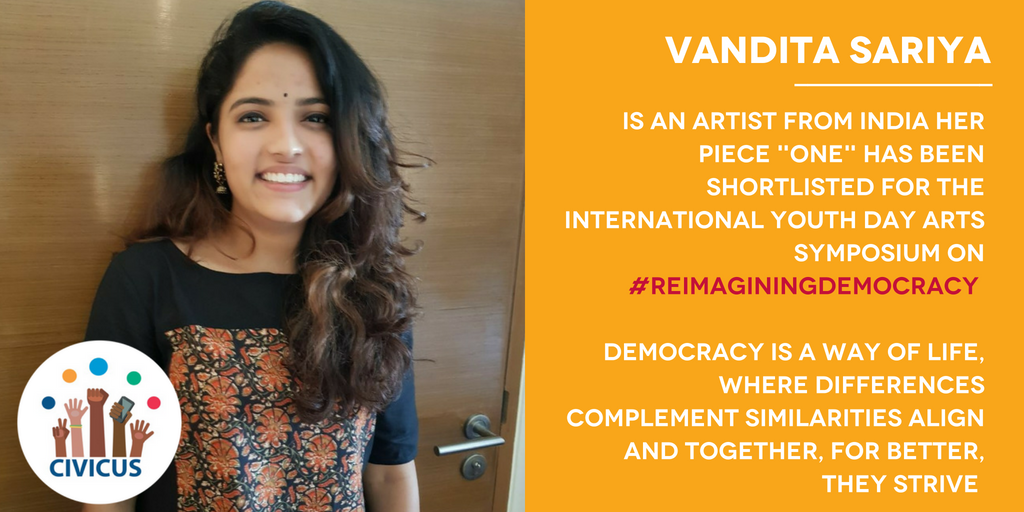 "Democracy is a way of life.
Where differences complement,
similarities align,
and together, for better, they strive. " 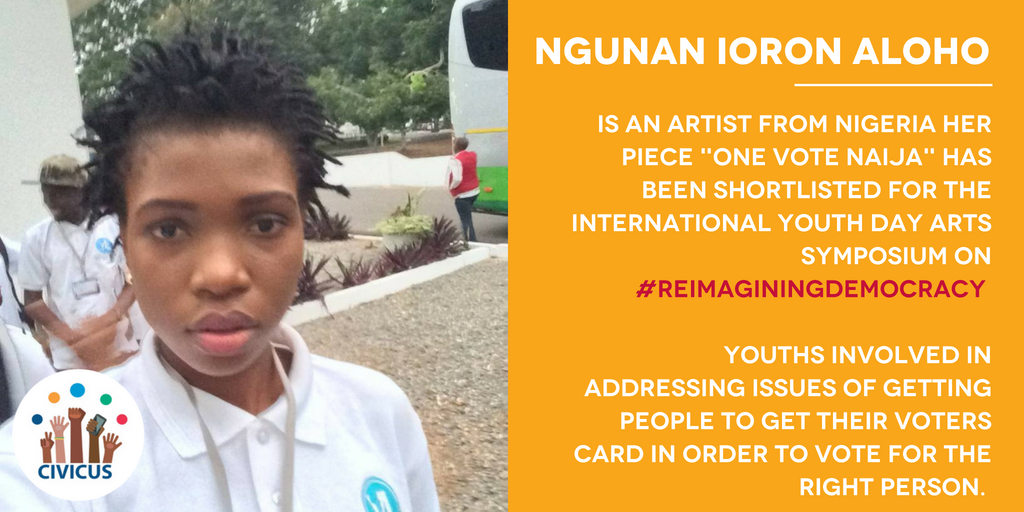 "Youths involved in addressing issues of getting people to get their voters card in order to vote for the right person. People to know their rights and understand that we are the ones who chose our leaders. " 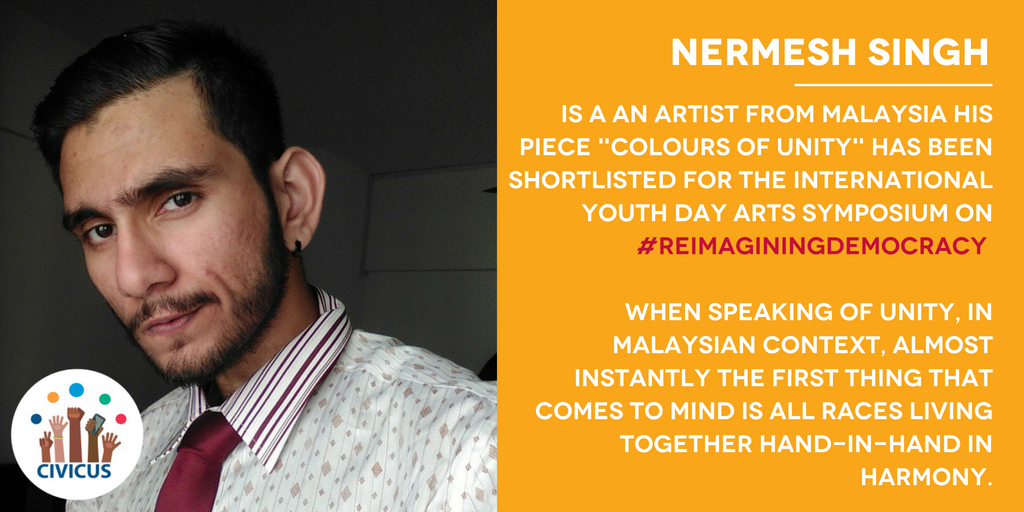 When speaking of unity, in Malaysian context, almost instantly the first thing that comes to mind is all races living together hand-in-hand in harmony. As picture perfect as that may be, it is only a portion of what unity is truly all about. The spirit of brethren amongst the many races is merely one speck of the larger spectrum of unity. Unity comes in many other forms the likes of unity in education, cultural appreciation, socio-economy, political, regional, etc.In the video, 4 friends of different life background were tensed on the attitude of 21st generation; however the love in between embrows them to continue their long-lasting friendship.

Henry Amazin Toe: “Know Who to Vote for” 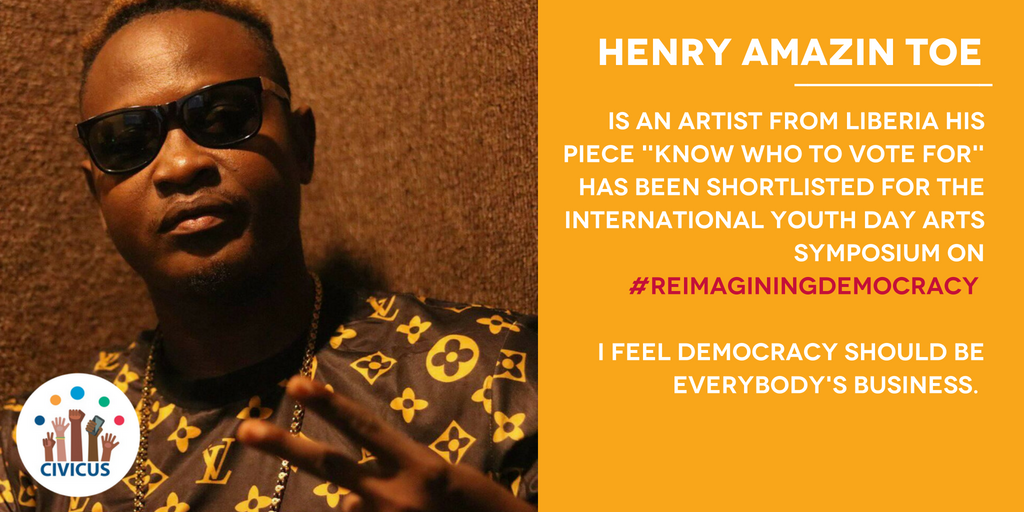 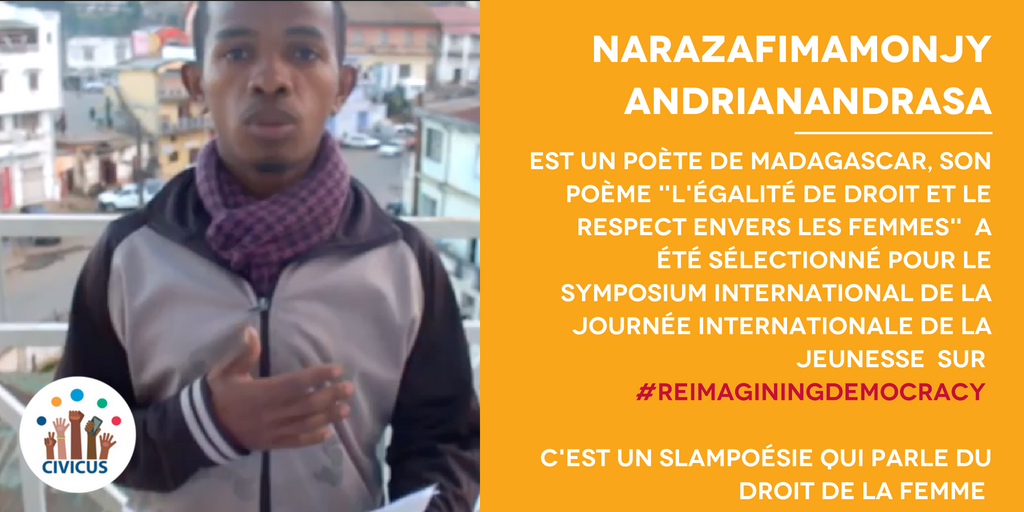