Democracy Dialogue held by Karapatan Alliance for the Advancement of People's Rights in Rodriguez, Rizal, 19 August 2018

Held on 19 August 2018 at the Rancho Luisito Hotel Resort in Rodriguez, Rizal, this democracy dialogue was organised by the Karapatan Alliance Philippines Inc. and took place after its Fifth National Congress. It brought together 60 human rights defenders around the theme ‘Formulating the Human Rights Defenders’ Agenda for the 2019 Mid-Term Elections in the Philippines’.

The democracy dialogue focused on the current human rights situation under President Rodrigo Duterte's administration in the Philippines and its relevance for the 2019 mid-term elections. 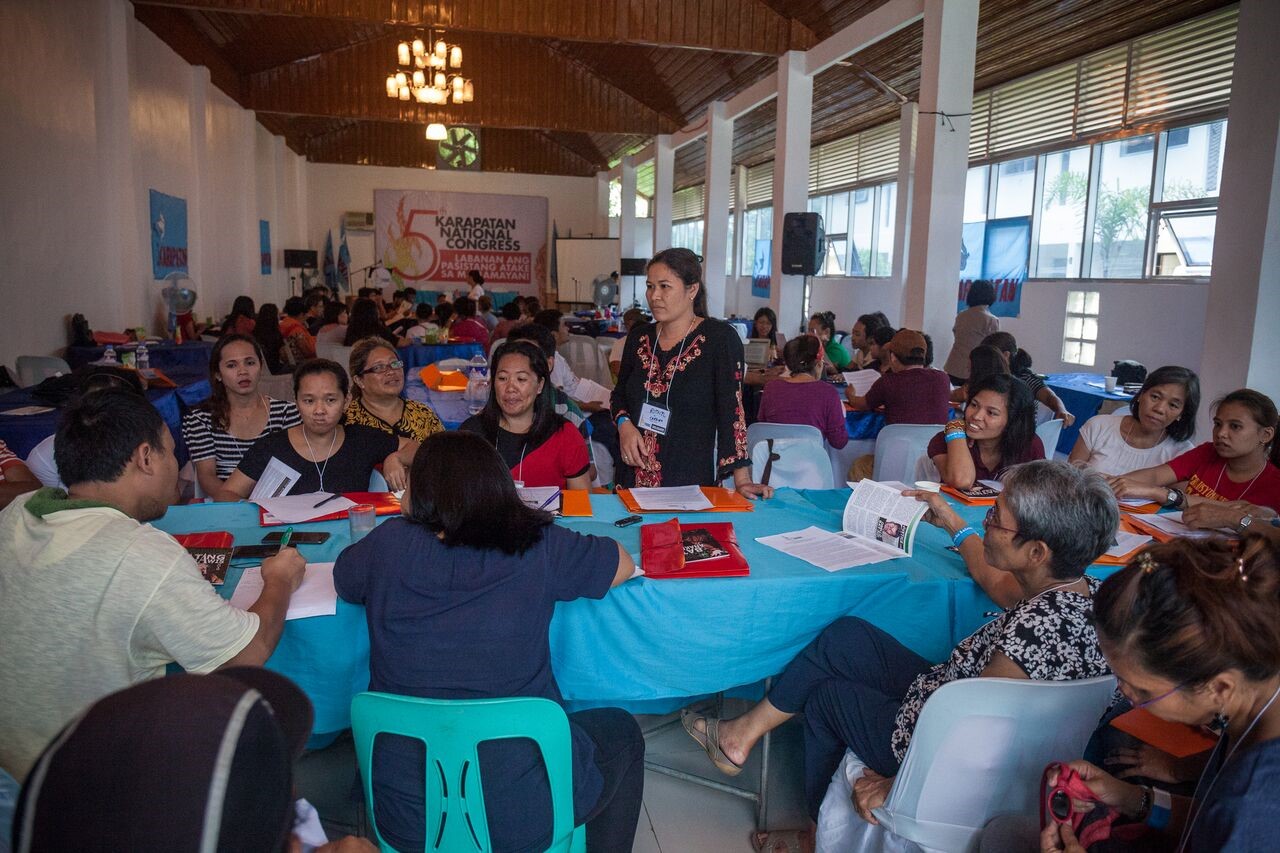 1. Definitions and concepts of democracy

Below are excerpts from the concepts of democracy shared by participants:

The Duterte government is installing former military officials in government and weeding out known critics. Indicators abound of the multiple forms used to subvert democracy in the Philippines. Senator Leila De Lima was sent to jail on alleged drug charges; the Commission on Human Rights was threatened with having its budget reduced to zero; Chief Justice Maria Lourdes Sereno, known for her opposition to the extension of martial law in Mindanao, was unconstitutionally removed from her position; trumped-up criminal charges were filed against four former progressive legislators and activists.

The Duterte government is attacking people exercising their democratic rights in various ways. The government is vindictive and is actively distorting the rule of law to pave the way for the curtailment of people’s rights.

The civil and political rights of the Filipino people are under attack. Individuals, activists and community leaders who were active in their organisations and have exercised their right to protest and petition the government for redress have been targeted. Karapatan has documented 169 victims of extrajudicial killings, mostly peasant and indigenous leaders and advocates, while 67,372 people have been subjected to various forms of threat, harassment and intimidation, including the filing of trumped-up charges. As of June 2018, 359 individuals have been sent to jail on the basis of trumped-up charges. Journalists are also subject to attacks, including harassment, intimidation and killings. This situation has intensified as a result of increasingly repressive policies and campaigns, including the ‘war against drugs’, the Human Security Act of 2007, the government’s counterinsurgency programme Oplan Kapayapaan and the continued implementation of martial law in Mindanao.

The government’s so-called war against illegal drugs best exemplifies its contempt for human rights. An estimate of 23,000 Filipinos have been reported victims of this campaign, killed under highly questionable circumstances. Victims of this campaign are denied their basic rights to due process and are mercilessly executed by the police. This has worsened the climate of impunity in the country. Police, military and other state forces are exempt from prosecution and accountability for any rights violations related to the government’s counterinsurgency drive or its campaign against illegal drugs. The President’s directives played a role in enabling state forces to commit abuses without fear of consequences.

Military operations have also resulted in blatant violations of people’s economic, social and cultural rights. After the Marawi siege, many Muslims were denied entry back to their homeland, after spending several months in evacuation centres in grim conditions. Instead, a rehabilitation plan for war-torn Marawi City facilitated the entry of big corporations at the expense of residents.

Despite promises to end contractualisation, the government has continued to pass laws and regulations, including Executive Order 51 and Order 174 of the Department of Labor and Employment, that allow labour-only contracting and other contractual schemes. This facilitated the continued practice of corporations and firms preventing their workers from forming unions and demanding decent wages. While prices continue to surge, wages have remained stagnant. According to the National Economic and Development Authority, a family of five needs 42,000 PHP a month (approximately US$780) to live decently. This means that two family members would have to earn at least 21,000 PHP a month, or 808 PHP daily, an amount that the majority of Filipinos do not make. This is exacerbated by the implementation of anti-people policies such as the Tax Reform for Acceleration and Inclusion Law and the lack of job opportunities. As of June 2018, the country has hit a record-breaking inflation rate of 5.2 per cent.

In another effort to worsen the plunder and repression experienced by Filipinos, the Duterte government has aggressively campaigned for amendments to the 1987 Philippine Constitution to remove restrictions on foreign ownership of the country’s resources and to solidify the clout of traditional politicians in their respective territories. Meanwhile, the proposed legislation against political dynasties has remained in limbo. The Duterte government’s intent to shift the form of government merely promotes an increase in the patronage and corrupt politics that have already permeated Philippine society.

Popular elections have been held in the Philippines, but they are always marred with cheating and even violence, perpetrated by politicians eager to sway the results to their favour. Elections may be considered by some as a means to measure democratic space in countries, but in the Philippine context they seem to have become platforms for politicians to retain and consolidate power and wealth.

On the whole, the Philippines is backsliding, becoming a country where opposition is persecuted, and people’s political, civil, economic and social rights are outrightly neglected.

However, the mid-term national and local elections can be an opportunity for rights defenders and civil society actors to promote awareness, reach out to the broader public and advocate for legislative and policy reforms, especially on civic space.

3. Responses of human rights defenders and proposals for inclusion on the Human Rights Defenders’ Agenda for the 2019 elections

The following were drawn up by democracy dialogue participants as points for the Human Rights Defenders Agenda for the 2019 elections: 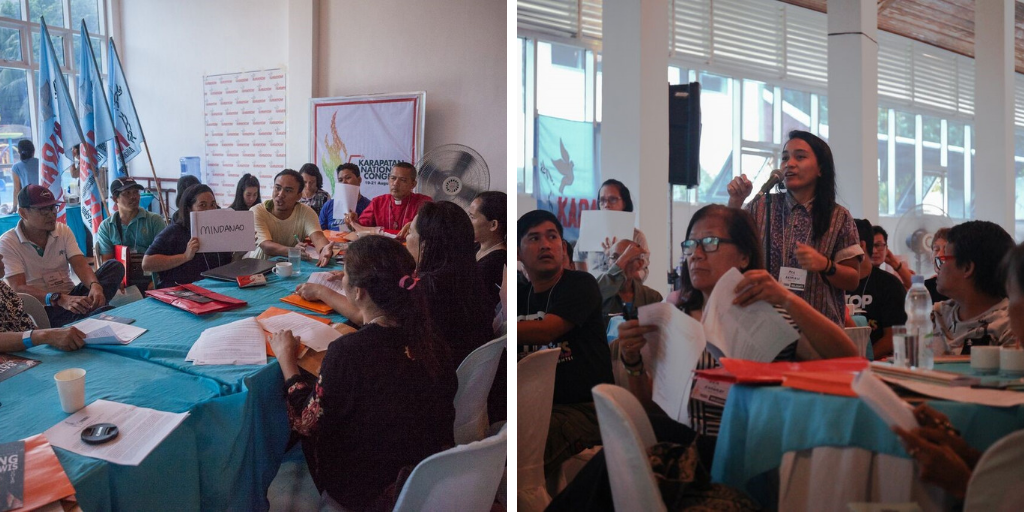