Civil Society in Cambodia: Existing Under a Shadow 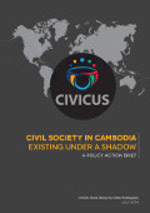 As part of its work to monitor civic space, from time to time CIVICUS produces Policy Action Briefs on countries where civil society is under increasing and or dire threat. As part of this work, we have produced a Policy Action Brief on Cambodia which highlights the following:

•Drawing up of restrictive legislation to quell dissenting voices

The Brief is particularly relevant as Cambodia has recently completed its Universal Periodic Review at the UN Human Rights Council while rejecting some recommendations to protect civil society freedoms.

Public dissatisfaction at the manipulation of democracy by members of the ruling political elite has led to a brutal response by the Cambodian state. The brief also sheds light on attacks on human rights activists, environmental and land rights defenders in Cambodia. Finally, it highlights the multiple challenges that the country’s vibrant civil society faces and makes several recommendations in the wake of the increasingly disenabling environment for civil society and citizen participation in the country.