The 47th Session is set to run from 21 June to 15 July, and will cover a number of critical thematic and country issues. Like all Sessions held over the course of the pandemic, it will present challenges and opportunities for civil society engagement. CIVICUS encourages States to continue to raise the importance of civil society participation, which makes the Human Rights Council stronger, more informed and more effective.

CIVICUS will be engaging on resolutions on Eritrea and Belarus, as well as calling for formal Council action on Ethiopia. Other countries of serious concern as we approach the 47th Session include Colombia, Myanmar and China.

On thematic issues, the resolution on civil society space comes at a critical point. COVID-19 has exacerbated many existing challenges, but it has also highlighted civil society’s value and resilience. 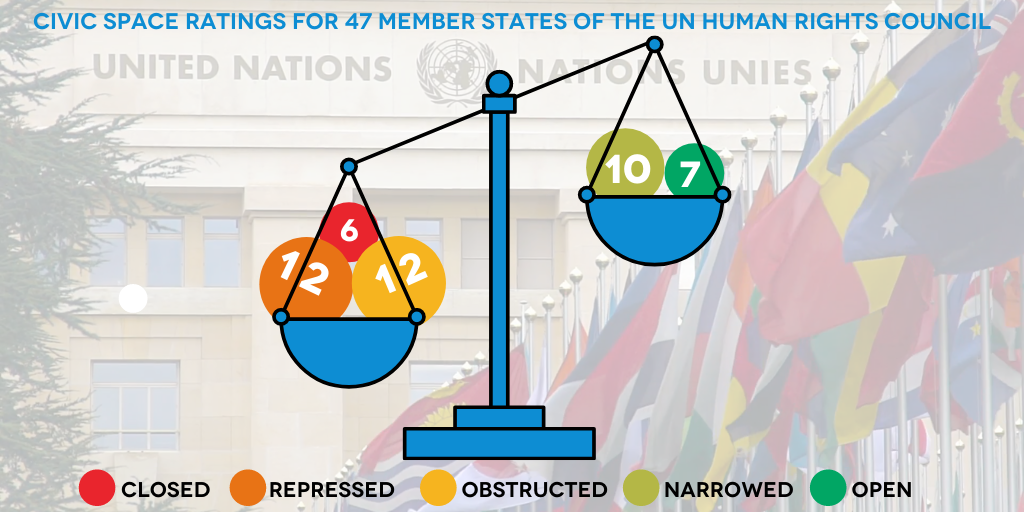 Eritrea is rated as closed by the CIVICUS Monitor. Freedoms of peaceful assembly, association and expression remain severely curtailed in Eritrea, and accountability for past and ongoing human rights violations is non-existent. As a Council member, Eritrea is reneging on its obligation to uphold the highest standards of human rights and cooperate with Council mechanisms. CIVICUS calls on the Council to support the adoption of a resolution extending the mandate of the Special Rapporteur on the human rights situation in Eritrea for a further year.

Colombia is rated as repressed by the CIVICUS Monitor. Nationwide protests in Colombia sparked by a proposed tax reform have been brutally repressed by law enforcement. In the context of escalating violence, the killing of human rights defenders and community leaders has continued unabated. We call on members and observers of the Human Rights Council to raise concerns about Colombia, with a view to mandating monitoring and reporting on the crisis.

Myanmar is rated as repressed and is currently in the CIVICUS Monitor Watchlist. Since the military coup of 1 February, over 800 people have been unlawfully killed, most during protests and with impunity. CIVICUS and other national and international organisations strongly urges the Council to postpone the adoption of the outcomes of Myanmar’s Universal Periodic Review (UPR) amid the military coup, and to reject the representative of the Myanmar military junta to the UN Offices in Geneva.

Ethiopia is rated as repressed by the CIVICUS Monitor. Over the last seven months an overwhelming number of reports have emerged of abuses and violations of international humanitarian and human rights laws during the ongoing war in Ethiopia’s northern Tigray region. CIVICUS, along with other international and national NGOs, call on the Council to ensure that the Human Rights Council urgently addresses these atrocities by adopting a resolution which recognises these concerns.

Belarus is rated as repressed by the CIVICUS Monitor. The human rights situation in Belarus continues to deteriorate alarmingly. Journalists, members of the political opposition and human rights defenders have been subjected to arbitrary arrests, detentions, intimidation and violence. More than 34,000 people have been arrested. Given the ongoing crisis, CIVICUS joins civil society partners in calling for the Human Rights Council to renew the mandate of the UN Special Rapporteur on Belarus.

China is rates as closed by the CIVICUS Monitor. China’s dire human rights record is well documented both by Council mechanisms and by civil society. In the Hong Kong Special Administrative Region, the CIVICUS Monitor has documented an alarming regression of civic space since June 2019. CIVICUS calls on member and observer States of the Council to raise these concerns in relevant debates at the Council, particularly with the Special Rapporteur on freedom of peaceful assembly, with a view to supporting formal Council action if human rights obligations are not upheld.

The impact of the COVID-19 pandemic on civil society space is impossible to overstate. Civil society was a target for the new restrictions introduced, which often went far further than could be justified in relation to the pandemic and threaten to outlast it. A robust and vibrant civil society is able to respond to the needs of the community in a crisis situation and plays a pivotal role in fighting disinformation and providing essential services. CIVICUS encourages states to co-sponsor the resolution on civil society space, and to highlight the critical role of civil society in emergencies – one which can be undermined by lack of access to resources, curtailment of fundamental freedoms, and a growing digital divide – and for the resolution to mandate examination and ways to address these key challenges.

The CIVICUS Monitor has consistently outlined challenges faced by civil society in terms of restrictions to fundamental freedoms precipitated by the pandemic. With sufficient and shared resources, the pandemic can and will be overcome. However, the ramifications of rollbacks in hard-fought gains in civil and political rights – whether willful or unwilful – could last for generations. Continued restrictions on civil society will curtail any chance of building back better. As the pandemic appears to be abating, it is by no means at an end, and the impact of pandemic response is likely to reverberate for years into the future. We therefore also call on States to support any Human Rights Council initiatives to continue this monitoring.

The Special Rapporteur will present the mandate’s latest report on access to justice in the context of freedom of peaceful assembly. Over the last year, the CIVCICUS Monitor documented detention of protesters as one of the most common tactics being used by governing authorities to restrict the right to peaceful assembly. In this context, we are particularly concerned with Cambodia, India, Chad, and Poland.

The right to seek, receive and impart information is essential during a public health emergency. The special rapporteurs report on disinformation highlights a crucial challenge – that censorship and restrictions on access to information, including through the suppression or imposition of content relating to COVID-19 and the suspension of media outlets due to their COVID-19 coverage.

We call on States to raise specific countries of concern in their responses to the Special Rapporteur.

Two years ago, on 1 February 2021, the Myanmar military junta seized power in an illegal coup. The...