UAE: ‘Many leaders remain silent in the face of systematic human rights abuses’ 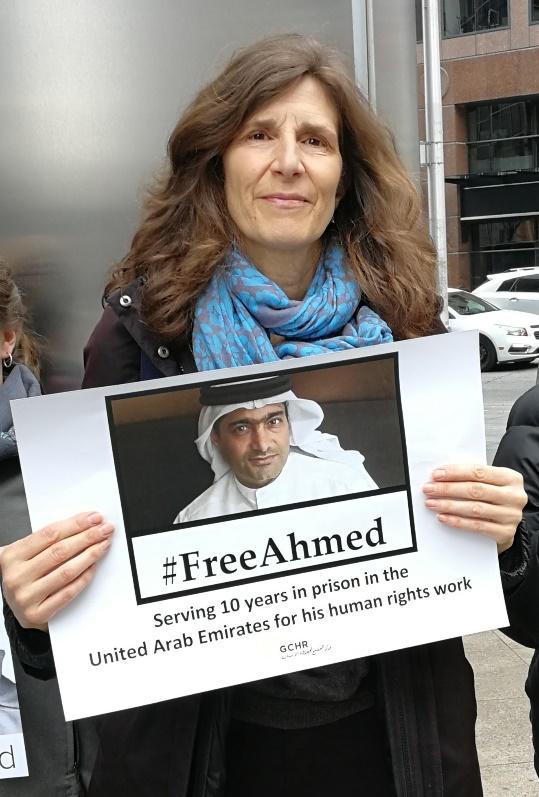 CIVICUS speaks with Kristina Stockwood of the Gulf Centre for Human Rights (GCHR) about the current state of civic space in the United Arab Emirates (UAE) and the government’s efforts to improve its international reputation by holding the Expo 2020 event in Dubai.

GCHR is a civil society organisation (CSO) that provides support and protection to human rights defenders in order to promote human rights, including the rights to the freedoms of association, peaceful assembly and expression.

What is the current state of civic freedoms in the UAE?

A dominant thread throughout GCHR’s coverage of the UAE is the stark difference between the progressive and forward-thinking image the UAE projects on the international stage and its despicable treatment of human rights defenders (HRDs) and others in civil society. Every single HRD active in the UAE has been imprisoned or driven into exile in violation of their right to the freedom of expression. The UAE cracks downs systematically on critical and independent voices who advocate for human rights in the country, both online and offline.

As GCHR shows in a recent report, the UAE authorities rely on torture to consolidate this oppressive climate. Key emerging patterns are the use of enforced disappearances following arbitrary arrest, detention to perpetrate torture with impunity, the punishment and further torture of those who dare to speak out about their conditions of detention, and the complicity of companies and the international community in the systematic perpetration of torture in the UAE.

The UAE also continues to persecute HRDs in exile. In 2021, the UAE cabinet issued ministerial resolution 83, which added 38 people – including several HRDs and a researcher – and 13 entities to the government’s terror list. Also in 2021, it was revealed that one of the targets of surveillance under the Pegasus Project was Alaa Al-Siddiq, an Emirati activist and the executive director of ALQST for Human Rights, who was killed in a traffic accident in the UK in June 2021, where she had relocated to flee persecution.

Al-Siddiq’s father is one of the UAE94 – a group of prominent HRDs, judges, academics and students convicted and imprisoned following a trial that lacked the most basic international standards of fair trial and due process. They are due for release after 10 years in prison in 2022, but human rights groups fear that high-profile prisoners won’t recover their freedom, as the UAE uses so-called ‘Munasaha (rehabilitation) centres’ to keep prisoners locked up past the end of their sentences.

How is GCHR working to expose these human rights violations?

Exposing these human rights violations has been at the heart of GCHR’s work. We monitor the situation on the ground, produce reports, advocate internationally and campaign for the release of HRDs.

In January 2022, together with Human Rights Watch, we issued an urgent appeal to help Ahmed Mansoor, who is on GCHR’s Advisory Board. Mansoor was detained in March 2017 and for years has been held incommunicado, isolated from other prisoners, denied even a bed and mattress. After he wrote a prison letter that was published by regional media in July 2021, in which he detailed his flagrantly unfair trial and mistreatment in detention, the authorities retaliated against him by moving him to a smaller and more isolated cell, denying him access to critical medical care and confiscating his reading glasses.

In January 2022, along with several other CSOs led by MENA Rights Group we issued a joint appeal protesting against the UAE’s new Law on Combating Rumours and Cybercrime, which restricts civic space and free speech and criminalises acts that are protected under international law. We called on the UAE to immediately repeal or amend the law.

How is the UAE using Expo 2020 to divert attention and improve its international reputation?

Throughout the Expo, which started in October 2021 and ends on 31 March 2022, the UAE has made an effort to whitewash its image, projecting a country of tolerance that even promotes women’s rights. To that effect, a women’s pavilion was included at the Expo and Forbes held a big event for women.

The Women’s Pavilion at the Expo is designed to ‘reaffirm Expo’s commitment to gender equality and women’s empowerment’. But women in the UAE have no rights and no power, and have been imprisoned for their online activities. The head of the Expo himself is a prominent perpetrator of violence against women. In 2020, a British woman who was organising the Hay Festival in the UAE, Caitlin May McNamara, was assaulted by Sheikh Nahyan bin Mubarak Al Nahyan, commissioner-general of the Expo and Minister of Tolerance and Coexistence, after being lured to this residence on the false pretences that they would talk about the situation of Ahmed Mansoor.

Needless to say, not a single UAE HRD was invited to the Expo, an event whose organisers claim has the purpose of creating ‘a better tomorrow’ because that is what happens ‘when the world comes together’, as its slogan goes.

To what extent has the exposure of violations of the rights Expo 2020’s migrant workers challenged the UAE’s public relations machine?

The work of human rights groups to expose violations of the human rights of migrant workers building venues has been key regarding large events in the Gulf countries, such as the Dubai Expo and the World Cup 2022, which will be held in Qatar.

Migrant workers in the Gulf are subjected to massive human rights violations through the notorious kafala (sponsorship) system that strips them of their basic rights. Under this system, they have no right to move, travel or change work. They have little access to healthcare and no right to union representation or to form organisations. They are also denied the right to citizenship, even if they spend their whole lives working in these countries.

However, the plight of migrant workers has received more attention in Qatar than in the UAE, as the UAE uses its large PR machine to gloss over human rights violations.

The COVID-19 pandemic complicated things, as many low-wage migrant workers remained acutely vulnerable to infection. To make things worse, in late March 2020, the Ministry of Human Resources and Emiratisation issued an arbitrary and discriminatory decree allowing private companies to amend the contracts of migrant workers, put them on unpaid leave or force them to accept permanent or temporary salary reductions due to the spread of COVID-19. In April 2020, a letter sent by a coalition of 16 CSOs and trade unions called on the authorities to provide migrant workers with adequate protection during the COVID-19 pandemic.

How is civil society taking advantage of global media attention around Expo 2020 to advocate for human rights?

In October 2021, GCHR and over two dozen partners, including two Emirati CSOs which operate in exile – the International Campaign for Freedom in the UAE (ICFUAE) and the Emirates Detainees Advocacy Centre – organised the online Alternative Human Rights Expo to counter the narrative of tolerance promoted by Emirati authorities. The three themes of the Dubai Expo are mobility, sustainability and opportunity – none of which is freely available to HRDs in the region. We argued that ‘coming together to hear diverse voices’ and ‘create a better world’ is not something attainable in a place where people are locked up for speaking their minds.

At the Alternative Human Rights Expo’s main event, held online on 14 October 2021, over 25 human rights groups paid tribute to human rights defenders from the UAE and called for their release during the Dubai Expo. The event, hosted by GCHR’s Women HRDs Programme Manager, Weaam Yousef, and prominent activist Iyad El-Baghdadi, featured HRDs, poets, artists, musicians, writers and filmmakers from a dozen countries in the Middle East and North Africa and beyond. The aim of the event was to highlight the work of creative talents from the region, as well as that of imprisoned activists, whose work was read during the event. These included Ahmed Mansoor in the UAE as well as Abdulhadi Al-Khawaja in Bahrain, Alaa Abd El-Fattah and Sanaa Seif in Egypt and Golrokh Ebrahimi Iraee in Iran. Of those, Sanaa Seif was freed in December. Over 900 people participated or watched the event.

As part of that campaign, GCHR and 80 international CSOs delivered a letter to the UAE embassies in Geneva and London calling for activists imprisoned in the UAE to be freed, and for justice for women who have been abused in prison or at the hands of Emirati authorities. The letter, which highlights the case of Ahmed Mansoor, was delivered on Ahmed’s 52nd birthday. Those present at the embassy also filmed a birthday video for him.

Additionally, on 8 March 2022, International Women’s Day, GCHR co-sponsored an event with the European Centre for Democracy & Human Rights, ICFUAE and ALQST titled ‘Women’s Solidarity in Human Rights Activism: Storytelling from the Arab Peninsula’, where Emirati HRD Jenan Al-Marzooqi spoke of the persecution of herself and her family that forced her to flee the country. Other prominent WHRDs from Saudi Arabia, Oman and Yemen also told their stories.

On 8 March, GCHR also published a press release in the context of our campaign calling on governments in the region, including the UAE, to ‘take serious measures to end the use of sexual and gender-based violence, curb online harassment of women, stop the use of surveillance to persecute women HRDs, stop reprisals against them and their families, and remove travel bans among other restrictions’.

ICFUAE and GCHR also created a petition calling on the UAE government to release Emirati HRDs who are arbitrarily detained and serving lengthy sentences simply for their human rights activities. We will deliver the signatures to the UAE authorities at the end of the Expo, and this will be a powerful message that Emirati defenders matter to people around the world.

What should international civil society do to help bring these issues into the global agenda?

Following successful civil society advocacy, in September 2021 the European Parliament adopted a wide-ranging resolution calling for the immediate and unconditional release of Ahmed Mansoor and others in the same situation, including Mohammed Al-Roken and Nasser bin Ghaith, and all other HRDs, political activists and peaceful dissidents, and urging all European Union member states to suspend the sale and export of surveillance technology to the UAE.

On 15 March, 27 CSOs led by the Bahrain Institute for Rights and Democracy wrote a joint letter to Formula 1 (F1) CEO Stefano Domenicali to raise human rights concerns ahead of the Bahrain Grand Prix, held on 20 March. They praised F1’s cancellation of its race in Russia but condemned the company for creating a ‘clear double standard’ over the participation of three race venues – Bahrain, Saudi Arabia and the UAE – in the war in Yemen. They called on F1 to use its platform to secure redress for victims whose abuse was connected to their races and review their policy on racing in Gulf states considering their participation in the war in Yemen, among other recommendations.

It is important for international civil society to continue to raise concerns about the UAE’s human rights record, both inside the country and in relation to the war in Yemen.

Civic space in the UAE is rated ‘closed’ by the CIVICUS Monitor. The UAE is currently on the CIVICUS Monitor Watch List, which identifies countries in which a severe and abrupt deterioration in the quality of civic space is taking place.
Get in touch with the Gulf Centre for Human Rights through its website or Facebook page, and follow @GulfCentre4HR on Twitter.