CIVICUS speaks about the struggles of Indigenous peoples in Bolivia with Ruth Alipaz Cuqui, an Indigenous leader from the Bolivian Amazon and general coordinator of the National Coordination for the Defence of Indigenous Peasant Territories and Protected Areas (CONTIOCAP).

CONTIOCAP was founded in late 2018 out of the convergence of several movements of resistance against the destruction of Indigenous territories and protected areas by extractive projects and the co-optation of traditional organisations representing Indigenous peoples. Initially composed of 12 movements, it now includes 35 from all over Bolivia. 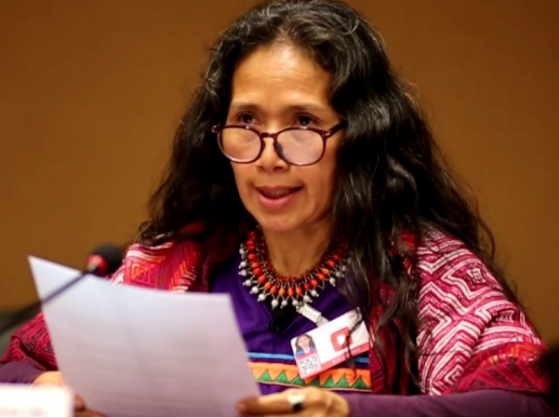 What challenges do Bolivia’s Indigenous peoples face in their struggles for land rights?

The biggest challenge for Indigenous peoples is the Bolivian government itself, which has become the main agent and source of rights violations, as it does not guarantee compliance with the constitution or protect the rights of its citizens, and particularly those of Indigenous peoples. We are third-class human beings, without rights, and are sacrificed.

The organisations that used to represent us have been politically subjugated and turned into accomplices and operational arms of the violation of the rights of Indigenous and peasant peoples and nations. The state apparatus is imposing all forms of extractivism on our territories and protected areas: mining, agribusiness and hydrocarbon exploration and exploitation.

The right to free, prior and informed consultation is being manipulated and turned into a simple administrative process that consists in drawing up minutes and signing forms and allows the participation of groups close to the government, which the government identifies as valid interlocutors even though they are not the real people affected by the projects in question.

Another challenge we Indigenous peoples face is that of understanding that we have been mentally colonised with offers of great wealth that never materialise. We must understand that the wealth that is generated in our territories is taken by outsiders and their corrupt environments. Behind the facade of interculturalism, the government divides us in order to discipline us and put us at the service of its political interests.

Once we understand this, the main challenge will be to restore the unity of Indigenous peoples, recover our ancestral memory of freedom, undertake the required self-criticism and dedicate ourselves to planning and building the country we want, exercising the rights that are already recognised in the constitution.

The Bolivian constitution and international conventions and declarations so far represent progress on paper only. The way in which they are implemented by the Bolivian state turns them into abysmal setbacks, gaps, walls and barriers. Thirteen years after its promulgation on 7 February 2009, the Political Constitution of the Plurinational State of Bolivia is still tucked away in a desk drawer. In the last decade and a half, a monocultural, centralist, authoritarian, patriarchal, elitist and classist state that imposes a radically extractivist and capitalist economic policy has become the most lethal weapon against economic, cultural, social and justice pluralism.

Violations of land rights include intimidation, harassment, discrediting, disqualification, criminalisation and legal procedures to silence land rights defenders. Such acts are carried out by oil and mining companies, the security forces, the judiciary – which is dominated by the government – and even by Indigenous organisations that support the government, which issue public resolutions to ignore us and restrict our right to defend our rights.

What are your mobilisation strategies?

Our strategy is to always maintain our integrity and dignity and to insist on exercising the rights protected by the Bolivian constitution and international conventions. To exercise our rights we don’t need anyone’s permission or approval, we just need to recognise ourselves as free and independent beings with full rights. This is what CONTIOCAP has been doing. If the government does not do its job, we must remind it that the state belongs to everyone and that we all have a moral obligation to question the bad practices of governments, to debate what kind of country we want and to seek ways for all of us to have the opportunity to grow as human beings.

Historically, we have resorted to long marches as an extreme form of mobilisation to draw attention and seek justice. First, we marched for a constitution that recognised our rights as Indigenous peoples. And for the past 13 years, we have marched to demand that those rights be realised in practice.

Our marches have been ignored, made invisible, isolated, harassed, and repressed. They have been accused of responding to opportunistic interests and discredited by powerful economic, political, and governmental forces.

The 37-day march initiated by the lowland brothers and sisters in September 2021 was no exception in this regard. After so much sacrifice, after abandoning their villages, their homes, their families, their animals, the response they got from the government was insulting. While they waited for a signal from the government, the government met not with them but with organisations subservient to its interests. It was a clear message that it is the government who decides whether we are first, second or third-class citizens.

What legislative changes do you demand?

Among the laws that go against Indigenous peoples is Law 535 on Mining and Metallurgy of 2014, which violates fundamental principles and guarantees of the rule of law. It grants privileges to mining operators that are placed above the principle of citizens’ equality. It grants them rights of access to water that supersede those of local communities. It violates fundamental rights of Indigenous peoples such as prior consultation, which is reduced to an administrative process with deadlines and procedures that undermine consultation as a right.

We also demand the repeal of Law 969 of 2017, which violates the right to self-determination of the Indigenous peoples of the Isiboro-Sécure Indigenous Territory and National Park, of Supreme Decree 2298 of 2015, which violates our right to free, prior and informed consultation in the hydrocarbon sector, and of Supreme Decree 2366 of 2015, which allows oil exploration in protected areas.

There are many laws that we would like to see passed, but in the current context of total control of all powers by the government of the Movement for Socialism, it is dangerous to push a legislative agenda. In the best case scenario, the government could use it to whitewash its image, and in the worst case scenario, to promote its own interests. They would use us to validate norms that could even turn against us.

But we do demand legislation to guarantee the economic inclusion of productive community organisations and producer families, the approval of the Bill on the Restitution of Ancestral Territories, which was introduced in 2019, and the reform of article 10 of Law 073 on jurisdictional demarcation. We demand that priority be given to effective compliance with the Regional Agreement on Access to Information, Public Participation and Access to Justice in Environmental Matters in Latin America and the Caribbean (Escazú Agreement) and other international agreements, conventions, pacts and covenants.

Do you see your struggles as part of a broader regional movement?

The struggle to protect land and the environment is not the struggle of a single movement but a global struggle for the defence of life through the protection of our land. Nor is it the product of a sudden inspiration, but of an awareness of our right and the right of all forms of life to exist in this world. We seek respect as human beings who have taken care of the planet for all of us, even for those who are now destroying it.

In that sense, our struggles are the same as those of Indigenous peoples around the world. We are somehow connected and linked at regional and global levels, although over the past two years the COVID-19 pandemic has prevented us from having face-to-face exchanges, while virtual exchanges have been hindered by the limitations of access to communications in Indigenous territories. However, we are now resuming the exchange of experiences and coordination.

They can help us by making our struggles visible, making them known so we can connect with other struggles of Indigenous brothers and sisters around the world. We want them to know that we defend our territories in precarious conditions and with our own resources and sacrificing the economy of our families, even more so after the pandemic. And we do this not only for ourselves but for all beings that require oxygen and water to live. We need direct support with small funds for legal and other emergency actions.

We hope that they will help us unmask the double discourse of the Bolivian governments of the past 16 years, which in international spaces have presented themselves as saviours of Indigenous peoples and defenders of Mother Earth. This is far from the truth; these are just speeches that sound good from the outside and that international organisations like.

We must unmask the international propaganda about left-wing governments. For us Indigenous peoples, all the governments of Bolivia – whatever their political colour – have had the same plans against Indigenous peoples. They seek to relegate us, put us off, divide us and pit us against each other to perpetuate themselves in power.