COLOMBIA: ‘The protection of the environment is inseparable from the success of the peace process’

Following a year marked by massive mobilisation on the climate emergency, CIVICUS is interviewing civil society activists, leaders and experts about the main environmental challenges they face in their contexts and the actions they are taking. CIVICUS speaks with a young Colombian student, active in the climate movement, who for security reasons asked to remain anonymous. In addition to mobilising in the context of the #FridaysForFuture movement, the interviewee is part of Post-Conflict Children (Hijos del Posconflicto), a recently created group that seeks to render the experiences of people on the ground visible and defend the peace process in Colombia. On the crossroads of various struggles, the interviewee emphasises the defence of the peace process as a key to preserving Colombia’s environment and biodiversity. 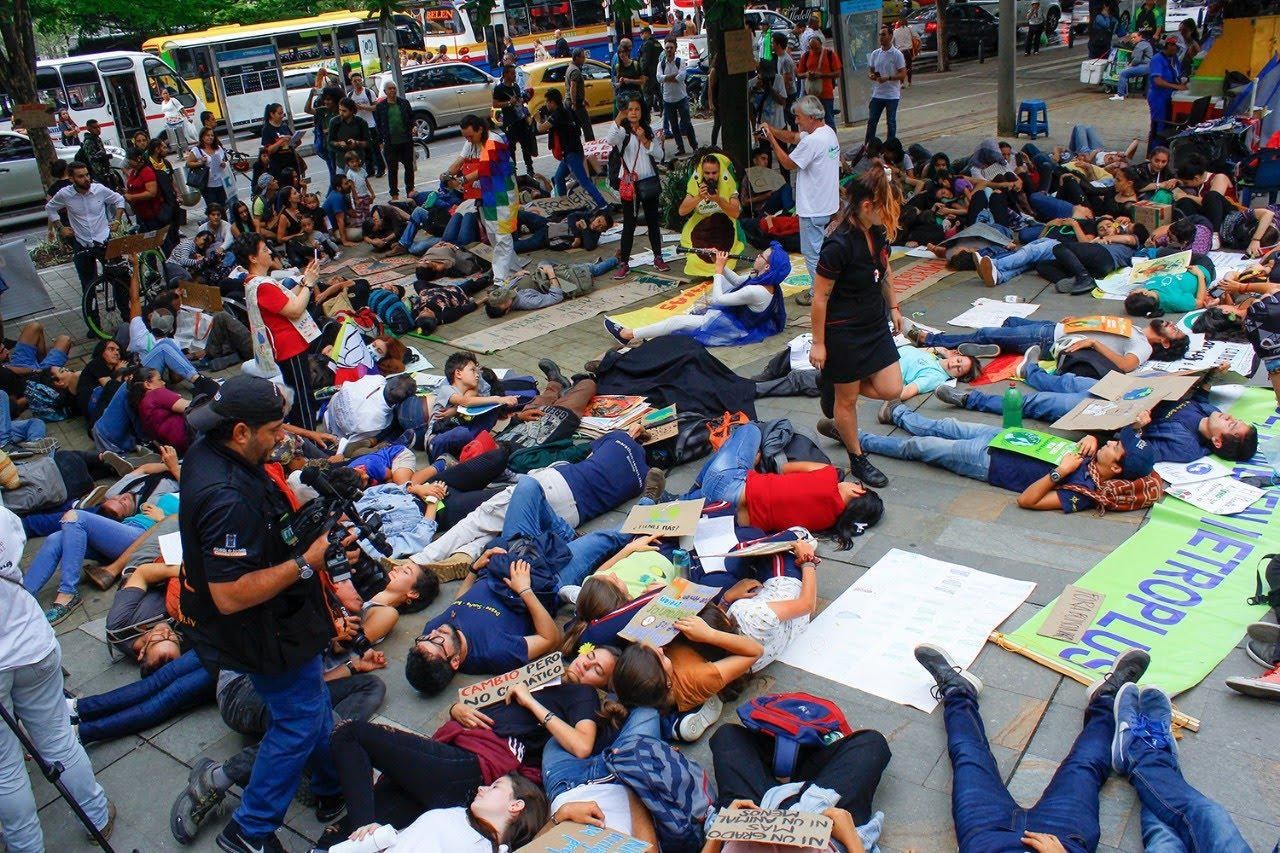 From your perspective, what is the most urgent environmental problem in Colombia?

The most urgent environmental problem is deforestation. Deforestation rates in Colombia are very high, and the situation has not improved following the signing of the peace agreements. That is because, in times of armed conflict, the Colombian guerrillas, mainly the Revolutionary Armed Forces of Colombia (FARC), controlled much of the jungle territory of Colombia. Of course, no one dared get into that territory: multinationals and oil companies did not have a presence there; nor did the industry of cattle-raising. After the peace agreements were signed and the guerrillas withdrew, the problem that has plagued Colombia since the 1950s – land distribution – increased.

Colombia has extremely regressive land distribution, with land property concentrated in very few hands. With the withdrawal of the guerrillas and the arrival of multinational corporations, land grabbing has increased. Lands are privately appropriated, deforested and used for raising livestock, while the local population continues to be displaced.

At the same time, there are still active armed groups operating outside the law, particularly far-right paramilitary groups, alongside the smaller guerrilla force of the National Liberation Army (ELN) and some FARC dissidents who refused to engage with the peace process. These armed groups are fighting over the territory with the aim of taking control of coca crops and expanding them, causing greater deforestation.

Therefore, both the continuation of the conflict in some territories and its termination in others are having a direct influence on deforestation. The peace process contains a series of mechanisms to counteract deforestation, but its effects will depend on whether it is effectively implemented. In that sense, the protection of the environment is inseparable from the success of the peace process.

What mechanisms in the peace agreements would help stop deforestation?

The peace agreements include two specific mechanisms to stop deforestation. The first one is comprehensive rural reform, aimed at distributing land in the Colombian countryside and enforcing respect for the uses assigned to the land – for example, by ensuring that if land is for agricultural use, it is not used for raising livestock. The second mechanism is the Programme of Substitution of Crops for Illicit Use, aimed at tackling the drug problem. It is important to understand that many poor peasant families have had to grow coca in order to survive; through this programme, the state is offering them economic incentives to transition towards other sustainable crops.

How does youth activism contribute to the effective implementation of the peace agreements?

The struggle for peace is taking place on all fronts. We do three things: we mobilise on the streets in defence of the peace process; we do educational work so that people understand why the peace process is so important; and we do advocacy in various spaces.

The context in which we do this work is quite difficult. As soon as he took office, President Iván Duque objected to the peace process and tried to modify all aspects that he did not agree with or that he claimed were not fair. If he succeeds, this would ultimately mean a deactivation of the process that resulted from the agreements and the need to start over from scratch. This was no surprise: his entire campaign revolved around the peace process and was based on the dissemination of lies about it. He won the elections by manipulating people’s fears; he told people that the agreements would enshrine impunity. He tried to scare us by telling us that if the left won, we would become a second Venezuela. He also lied regarding his plans for extractive industries: he stated that oil exploration and exploitation through fracking would not be authorised, but in late December 2019 he drafted a decree that would allow fracking.

As an activist for peace and the environment in Colombia, have you had any participation in the global movement for climate justice?

Yes, along with a small group, I joined the Fridays for Future initiative. But our participation was limited to a series of actions and strikes aimed at launching the climate movement in our country.

It has been quite difficult for us to elicit mobilisation around the global climate crisis. First of all, there is much ignorance. In Colombia, most people have no idea what it is being done to them; the current president took advantage of this to spread lies, run a disinformation campaign and win the elections. In a country where public education is of very low quality and only rich people are able to further their studies, it is very easy to lie to people and make them believe you. So, the first problem is ignorance. Add to that fear: in Colombia people are afraid to speak, organise and protest. Colombians live in a state of incredible anxiety due to the systematic murders of social and environmental leaders. Colombia is one of the most dangerous countries in the world for human rights defenders in general and for environmental leaders in particular.

All of this has limited climate mobilisation. Some isolated actions have been held, but there has not been a big national, high-impact demonstration. That is why we were surprised to find out that a massive school mobilisation took place in the south of the country, in the department of Huila, where we least expected it to happen due to the complex security dynamics in those territories. We managed to get in touch with the young people who mobilised in Huila and together we took part in a national meeting held in the department of Caquetá, also known as the golden door to the Colombian Amazon. At that meeting we managed to coordinate our work with the communities that live in Amazonian territory and so far we are in the process of raising the cause of the Amazon and initiating a resistance to defend our forest.

We are currently starting to bring all the environmental groups together into a single climate front. We hope this will inspire those who are afraid to join as well.

Have you had any participation in international climate forums?

We have been to a Latin American meeting of Fridays for Future that was held in Chile with the support of 350.org. It was a meeting of climate advocates to build a Latin American network and take the movement to the regional level. It helped us a lot to meet other young people from other parts of the region who were also mobilising, to discover that we could get together and feel that we had international support to do our job. It gave us some hope.

Right after that meeting, we began to try to form a national environmental network, travelling to as many territories as possible and enlisting young people from other Colombian regions. There is still a lot to be done, but we are growing exponentially because when a new group joins in, they reach out to three or four other groups. Throughout 2019 we focused on this process, touring territories, communicating our message to people and creating links. We believe that the next time we may be able to mobilise at the national level. We will do so on 24 April 2020, on the occasion of the next global strike.

What kind of support would you need to be able to hold in 2020 the mobilisation that was not possible in 2019?

Right now our window of opportunity is the national strike, the series of protests that have taken place in several Colombian cities since November 2019. In a country where people are afraid to speak, on 21 November last year millions of people took to the streets. It was one of the largest mobilisations Colombia has witnessed over the past 40 years. This is a unique opportunity. Within the framework of these protests, the environmental movement has also put forward its proposals and demands. We may not be able to mobilise people specifically around climate, but we can take advantage of these mass mobilisations and put our issues out there. If there are people willing to mobilise, we can approach them, tell them what is happening to the environment and communicate our demands so that they understand that our issues also concern them and they start mobilising for them as well. By doing this, we succeeded in getting the national strike committee to include the declaration of a climate emergency in Colombia among its demands. This has been a very big breakthrough.

Civic space in Colombia is rated as ‘repressed’ by the CIVICUS Monitor.
Get in touch with Fridays for Future through its website, and with the Colombian campaign by email or through its Facebook page, and follow @FutureColombia on Twitter.