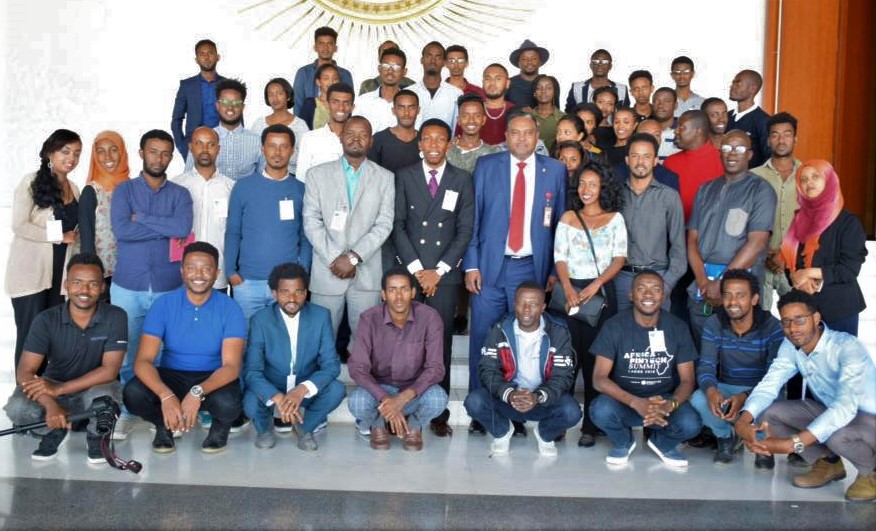 Never before have there been so many young people in the world, reports the United Nations. There are 1.8 billion people between the ages of 10-24 on our planet, who are increasingly taking action to drive change, development and innovation for themselves and their communities. They are also loudly expressing their discontent with Governments, corporations and other power holders who have failed to effectively address many of their needs and challenges. But while they are many and daring, young people still lack the resources, recognition and spaces to reach their full potential as agents of change.

The Young African Leaders Forum (YALF) is one example. The idea of creating this youth-led pan-African organisation was born in 2010 when its founder, Prince Ifoh, was writing his undergraduate final research project about African development. He saw a need to create a space for and by youth, where they could be empowered to engage in and lead on issues that matter to them.

Interestingly, while Africa is home to the youngest population in the world, with 60% of its people being under the age of 25, the median age of leaders in this continent is 62 years.

Ifoh’s idea was promising but, like many other young activists, he did not have the resources or support to launch it. It was only in 2014 that YALF started as a humble chat group on WhatsApp. “At that moment, thinking of anything else was a dream,” recalled Ifoh, who worked at an editorial company and pursued his activism during after-office hours.

Driven by his passion, he later quit his job, became a full-time activist (doing freelance work on the side) and invested his savings in the initiative. With time and hard work, YALF progressively grew into an organisation that now has more than 500 members from 20 African nations.

Most YALF members are low-income students from both rural and urban areas, along with a handful of young professional members who work in private and public institutions across Africa. The organisation is governed by five continental level officials, including Ifoh as president, and has one national coordinator in each country.

YALF’s work includes organising annual Pan-African Summits (#YALFPAS), which provide capacity building trainings to mentor young leaders in all regions of Africa, and publishing the bi-annual Young African Leaders Journal of Development (YALJOD) – Africa’s first youth-led journal, where writers share development insights, challenges and ideas to inform other young people and policy makers. They also lead several projects to promote education, entrepreneurship, technology, health and environment, which are the base of their ambitious initiative Impact 5000, launched in 2018 with the goal of improving the quality of life and opportunities for 5,000 women, children and youth, especially in underserved African communities, by 2020.

Surviving and growing without stable funding

YALF operates with limited resources that come mostly from in-kind support or sponsorships from entities like the African Union, the Walter Rodney Foundation (USA), the Hausa Television (Ghana) and Fahamu Networks for Social Justice (Kenya), to name some. In 2018, they started collecting member-contributions (US $5 per person, every two months) that, usually, only sum up to US $200 per bimester. YALF’s main asset is indeed the young members themselves, who invest their time, capacity, expertise and money in these initiatives.

“We reach out to companies, organisations, to the public and even applied for grants from larger donors but, when we are lucky, we mostly get in-kind or technical support. We often hear that the organisation is ’too new’ to apply for certain funds, that we should try after becoming 5 years old,” said Ifoh.

Despite the financial constraints, YALF estimates to have benefited (directly and indirectly) over 2,000 people through their work, including their entrepreneurship trainings for youth and women, computer modules, school-sponsorships for girl-children and even by directly helping women, for example, setting up a small poultry farm or a hair salon which provide them with income for their family. But Ifoh emphasises that some efforts are on-and-off or don’t progress as expected because they don’t have adequate funding.

For example, having hard copies of the YALJOD journals allows them to reach young people in places where Internet access is low (only one sixth of Africans are Internet users), as well as the policy makers they want to influence, who –highlights Ifoh– are aged, less engaged with technology and prefer reading print publications. In 2016, YALF was able to produce 1,000 hard copies of the first journal because they were donated by Ifoh’s former employer. But the 2018 edition was published mainly online because they couldn’t find sponsors for printing – Ifoh printed only 25 copies with his own savings.

Their Impact 5000 initiative has also hit some bumps. They started a fundraising campaign in a couple of global, online crowdsourcing platforms, like Gofundme.org, with the goal of raising US $100,000, but it has not received donations. Ifoh believes that their lack of visibility abroad has affected them. They have not been lucky with bigger donors either.

On the bright side, the African Union provides support to host a launch event for each YALJOD issue, in Addis Ababa, Ethiopia, and they found allies who promote the online publication even outside Africa, like the Kennesaw States University, in Georgia, United States. And YALF doesn’t give up on pursuing Impact 5000.

Ifoh thinks that donor entities should have adapted requirements for youth-led organisations, make their selection criteria clearer and more public, and that start-up nonprofits should also have access to seed funds like the ones widely available to start-up enterprises.

“Donors should see that many young people and youth-led organisations are already doing great things and having an impact at the grassroots level, working in communities where donors don’t go or can’t reach, and going beyond their means to do so… But we don’t have the support, funds, networks and connections to have a greater impact,” highlighted the committed activist. “They have to give youth a chance.”

YALF’s Impact5000 initiative aims to empower 5000 girls, youths and women in Africa by supporting girl-child education, women skill-development, women and youth SMEs, vocational trainings, finance seminars, business symposiums and computer support programmes, among others. Watch this video to learn more about it and if you’d like to support it, please contact .