By Lesego Moshikaro and Yessenia Soto

Imagine you lead a non-profit feminist organisation in Egypt. 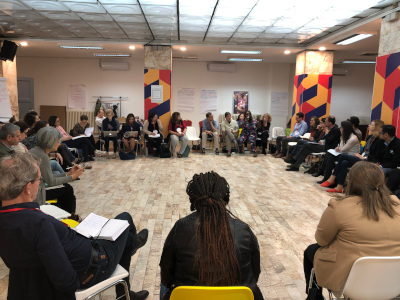 Your work involves empowering women and lobbying the government to respect and protect their rights. In repressive Egypt, the authorities don’t like what you’re doing, and they want it to stop. So, they attack you – hitting you with a travel ban, freezing all your assets and charging you with receiving illegal foreign funding for your civil society organisation (CSO), which could lead to life in prison if you’re found guilty by Egypt’s notoriously biased courts. In aggressive and threatening interrogations, officials pressure you to shut down your CSO ‘voluntarily’, or things could get worse for you.

So, what do you do? As a determined rights defender, you intend to challenge this attack on your fundamental freedoms of expression and association. But you need urgent help and resources to fight back. One thing you can do, is to apply for emergency crisis funding to launch a legal and social campaign against the threat from the state.

That is what the head of an Egyptian feminist CSO did to successfully deal with exactly such a scenario. The quickly disbursed funds enabled her to continue activism work while setting up dialogue with various government representatives on the importance of civil society in Egypt, and to launch a media campaign to attract international attention and support. The result: she and her organisation were free to continue their work.

Crises, emergency and resiliency grants, also known as rapid response mechanisms (RRMs) have become a lifeline for many activists, CSOs and groups, who are increasingly becoming a target of unprecedented attacks and violations from state and non-state forces across the world in their attempt to restrict civil liberties and freedoms and shrink civic space. According the CIVICUS Monitor, an online platform that tracks threats to civil society in countries worldwide, 96% of the world’s population live in countries where their rights to freedom of expression, association and peaceful assembly are not properly respected and protected.

These funds are designed to expeditiously deliver short-term grants, of up to US$10,000 on average, with very few requirements.  This allows targeted individuals and organizations to respond effectively to threats and carry out their work even in highly restrictive and closed spaces.

“Emergency funds are a crucial safety net for those putting themselves at heightened risk in order to push back the threats against civil society. And we have seen that repressive regimes -and even not so repressive- do not hesitate to damage, imprison and violate the rights of human right defenders,” explained Mindy Michels, director of the Freedom House Emergency Assistance Program, which has provided emergency assistance to more than 3,500 human rights defenders, civil society organizations, and survivors of religious persecution in 110 countries and territories.

The good news is that the use of rapid response mechanisms are on the rise and more local and international donors, aid agencies and human rights networks are willing to make emergency grants to CSOs, movements and groups at-risk. But the challenge often is getting the money and help to them – something more difficult, time consuming and riskier than you would think.

While some fund managers said that it can be done even in 24 hours when all the perfect conditions align, most agreed it can take a couple of weeks or months.

Security is another major challenge. “The top priority for emergency funds is to deliver the support without putting people at more risk,” emphasised Michels. But this has become harder as more organisations work within restricted or closed civic spaces, where activists are at risk of imprisonment and reprisals, and CSOs operate illegally or face restrictions on foreign funding. According to a recent Amnesty International report, at least 50 countries have passed arbitrary laws limiting the work of CSOs and restrict their access to funding, in the past few years.

Funds with a global scope, including the Crisis Response Fund (CRF) established by the global civil society alliance CIVICUS and which has awarded 350 grants, encounter visibility barriers and difficulties in reaching out to minority CSOs and grassroots groups in different regions, especially given the over reliance of digital processes that leave vulnerable groups under attack excluded.

What can be done?

There is an urgent need for innovative approaches and increased collaboration to overcome these challenges and ensure that rapid response mechanisms work better, faster, more safely and more inclusively.

“The threats are bigger than us. We cannot work alone,” said Sander Laban, advocacy specialist at Hivos. They run the Digital Defenders Partnership, which provides both technical support and incidental and sustainable emergency grants for mitigating digital emergencies, directed to journalists, bloggers, activists and CSOs.

In 2018, the Digital Defenders assisted 3,000 individuals and 250 organizations around the world that faced a digital threat. Not everyone received an emergency grant, but they did receive holistic support by their local and regional networks. The DDP also works closely with other funds and strategic partners to raise awareness, reach out to more people under attack and even to help cases that fall out of their mandate but could be assisted by another fund.

More coordination between existing funds and donors, working closer to the communities, building stronger local networks, enhancing the use of technology and thinking of other types of support beyond money were actions that the participants agreed could help these funds speed up the turnaround times, provide relevant resources, build bridges to deliver them in difficult situations and even increase their ability to see civic crisis on the horizon and work proactively on creating channels to provide emergency help.

These could improve the contribution of rapid response funds to human rights victories around the world. This support has led to the amendment and repeal of laws and bills that threaten civil society, activists and human rights defenders in Zambia, Nigeria, Mongolia, the Democratic Republic of Congo and Moldova, for example.

Lesego Moshikaro is a Data Analyst and Researcher on Rapid Response Funding at CIVICUS; Yessenia Soto is a Community Engagement Officer on Civil Society Resourcing at CIVICUS.

This is an extended version of the opinion editorial “Los activistas atacados necesitan ayuda urgente”, published in the Spanish newspaper El País.