By Lauren Bradford and Inga Ingulfsen 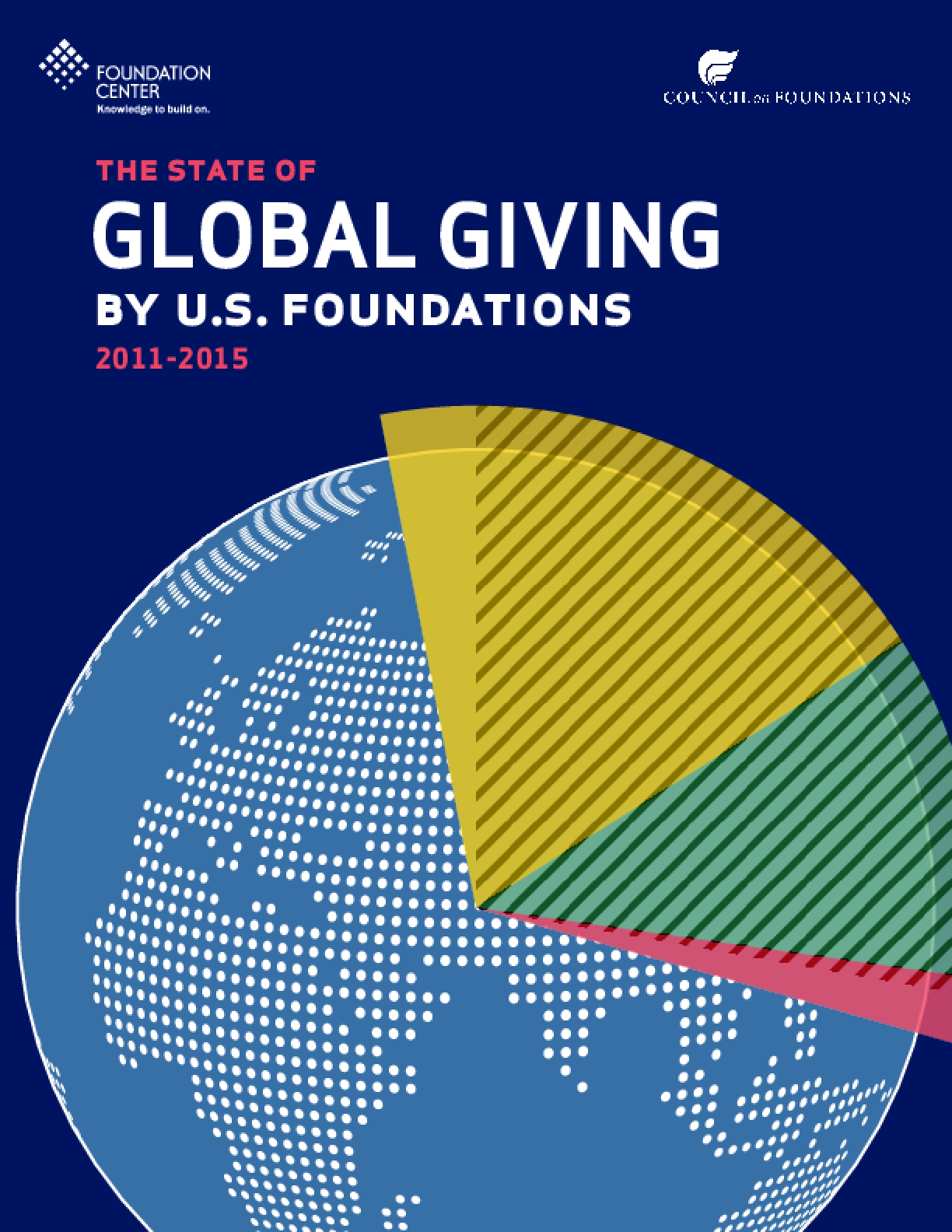 From 2011 to 2015 U.S. foundations awarded a total of 35.4 billion dollars for organizations or programs based outside the U.S. International giving grew by 29 percent over the five-year period and reached an all-time high of $9.3 billion.

These figures are drawn from The State of Global Giving by U.S. Foundations, a report jointly published by Foundation Center and Council on Foundations earlier this month. It’s the tenth in a series of joint research published by our two organizations since our first report on international grantmaking in 1997. (You can access the whole series here). While philanthropic funds are dwarfed by official development assistance – the $9.3 billion in international grants awarded by U.S. foundations in 2015 was equivalent to about a third of the $31 billion in U.S. official development assistance that year – we know governments alone can’t achieve the Sustainable Development Goals (SDGs) and that foundations are among the key civil society partners that will be instrumental in driving progress. We also know U.S. foundations provide critical support to civil society groups globally, including in countries with challenging legal environments for cross-border giving (more on this below). We therefore hope CIVICUS members and their extended networks will use our data and analysis to inform their strategic efforts and partnerships with U.S. foundations to strengthen civil society worldwide.

Here are four key takeaways for civil society advocates around the world on international giving by U.S. foundations:

However, it’s important to note that intermediaries in our dataset include a wide variety of organization types. For example, to avoid double-counting grant dollars, U.S. grantmaking public charities are not included in our dataset, some of which are explicitly focused on channeling funds directly to local organizations around the world. Intermediaries can also be international non-governmental organizations (INGOs) operating programs in multiple countries, or an organization indigenous to its geographic region but working across more than one country. Multilateral institutions and research institutions focused on global public health are also major recipients of international grants from U.S. foundations.

International giving by U.S. foundations also remains project-focused despite calls from civil society leaders over several decades for more long-term flexible funding and a growing body of research demonstrating how critical flexible funding is to the effectiveness and sustainability of civil society organizations. Just 18 percent of global giving by U.S. foundations was for general operating support and 65 percent was for project support. General support grants awarded directly to local organizations represented just 1 percent of U.S. foundations’ international grantmaking from 2011 to 2015.

Between 2012 and 2015, the International Center for Not-for-Profit Law found that 98 laws constraining the freedoms of association or assembly were proposed or enacted across more than 55 countries, 36 percent of which limited intentional funding of local civil society groups. Given the substantial limitations these laws can pose on the ability of U.S. foundations to provide direct grants to local organizations, for this report we made our first attempt at pairing data on direct funding flows by country with data about the legal environment for cross-border giving.

We found no correlation between the amount of direct funding from U.S. foundations to a given country in 2015 and that country’s score on the cross-border giving indicator of the Index of Philanthropic Freedom for the period spanning 2014–2015. Of the 20 countries receiving the most direct funding from U.S. foundations in 2015, five scored lower than the global average of 3.4, indicating a challenging legal environment for cross-border giving. India is a notable example, ranking fourth by direct giving but receiving a score of just 2.1.

How should we interpret this finding? First, the fact that countries with challenging legal environments are among the top 20 recipient countries of direct funding by U.S. foundations is encouraging and indicates a level of commitment among these funders to continue to support local organizations in difficult environments. Second, we suspect that rather than impacting the amount flowing to individual countries, legal restrictions are likely impacting the types of issues and sectors funded. Third, given the rapid increase in legislation passed during the time period we analyzed and beyond, we suspect that future analyses might reveal shifts in funding flows. As the Global Philanthropy Environment Index continues its efforts to provide quality data on the enabling environment, adding more countries to each annual report, in the coming years, we will be able to provide more in-depth exploration of the relationship between the closing space for civil society and U.S. foundation funding.

We also think this finding raises important questions for our field. Why does a significant amount of funding reach certain difficult environments, and not others? Are any of the strategies and mechanisms for channeling funds to countries with difficult legal environments transferable across country contexts? How are local organizations adapting their fundraising strategies when faced with an increasingly restrictive legal environment? What can we learn – and what can foundations learn - from their efforts to adapt?

In 2009, the Obama administration reversed the global gag rule. The rule restricted foreign non-governmental organizations (NGOs) from using any of their own, non-U.S. government funds to provide, counsel, or refer for abortions if they were also receiving funds from the U.S. government for other activities. While the use of U.S. government funds for these health services has been restricted since 1973, the gag rule prevented foundations and other non-government donors from providing support for reproductive health care to NGOs that rely on U.S. federal funds to sustain other parts of their operations and programs. In the years following the reversal, U.S. foundations increased their international giving for reproductive health care almost three-fold, from $362 million in 2011 to $1 billion in 2015, and increased more than two-fold as a share of their overall international giving, from 5% to 11%. We didn’t do a deep dive to determine whether the increase was targeted at non-U.S. organizations that receive federal funding, but we believe this growth is suggestive of the gag rule’s effect on non-government funding flows, a theory that is also supported by our conversations with funders working on reproductive rights.

In light of the increasingly difficult operating environment for civil society in countries across the world, we believe transparency is more important for our sector than ever. We hope you share this value with us and that you will use the evidence and data from the report to lend legitimacy to the critical claims you’re making in support of civil society.

Download a free copy of The State of Global Giving by U.S. Foundations here.

Did you miss our August 14th webinar on key findings from the report? Watch it here.

The findings that surprised us (and the ones that didn’t) - Alliance Magazine op-ed.

We’d love to hear from you, whether it’s feedback on our analysis, to share how you’re using the data to inform action, or if you want to join forces to support the philanthropic sector globally. You can reach Inga at and Lauren at