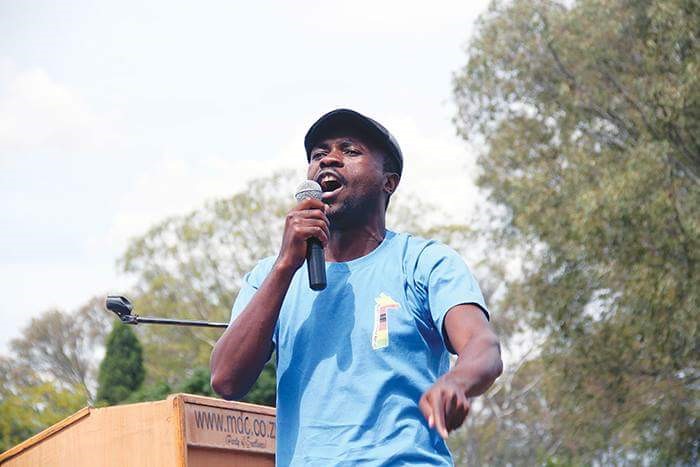 March 2016 marks a year since Zimbabwean activist Itai Dzamara’s enforced disappearance. Itai (pictured) is the founder of Occupy Africa Unity Square movement. His protest style included sitting in the Africa Unity Square in Zimbabwe’s capital, Harare, with posters calling for President Robert Mugabe’s resignation and respect of human rights. In Harare recently, CIVICUS spoke to Patson Dzamara, who is brother to Itai, on the activism work of his brother and efforts to locate Itai.

1. Tell us about Itai’s background

Itai is a journalist by profession and born in 1979. His journalism journey started when he was still in high school. At some point he led the journalism club at his school, Highfileds High One School. He studied journalism soon after his Advanced-Levels. After completing his studies, he worked for various publications including The Zimbabwean, The Standard and The Zimbabwe Independent. Itai also founded his own publication, The News Leader.

He is married to Sheffra and they have two children, a seven-year-old boy and a four-year-old girl.

2. Why did Itai choose the Occupy Africa Unity Square movement as a protest method?

Like I said, I think Itai has always been an activist even through his writing. He has always advocated for the rights of people and always sought to hold the political class accountable. He idolised former South African President Nelson Mandela among other political leaders hence his movement was non-violent. He believes in democracy, equality and the rights of all Zimbabweans as enshrined in the Constitution.

He told me that he was spiritually inspired to start the Occupy Africa Unity Square protest movement. He was thoroughly convinced that he had to take his activism a notch higher and that he did. He cares less for his own comfort and security hence he felt that a direct but peaceful approach is what was necessary to drive his message home.

Itai was arrested and tortured many times by the police and state security agents for his protests but that only seemed to strengthen his resolve not to give up. Many times he suffered injuries after being beaten by the police that required him to be hospitalised but each time he was discharged he was even more determined. His movement was growing but remained peaceful and was gaining attention locally and internationally.

3. Can you detail what transpired on the day of Itai’s disappearance a year ago?

It was the 9th of March 2015 and I received a phone call from Itai's wife, Sheffra, informing me that Itai had been abducted while having a haircut at a local barbershop in their neighbourhood in Harare. I was not moved into action initially because state security agents have taken Itai several times in the past and I just thought that it was one of those incidents whereby they would just take him, torture him and release him.

According to eyewitnesses in the neighbourhood, two twin-cab trucks had been seen roaming the neighbourhood for several days before his abduction and it’s the same two vehicles that were used to abduct Itai. It is said that four well-built men entered the barbershop and told Itai that they were arresting him in connection with stock theft. They quickly handcuffed him, bundled him into one of the trucks and sped off. From that day, Itai's mobile number has no longer been reachable and up until now we haven't really got to know what transpired after the abduction. No-one has taken responsibility and the police investigations have not yielded anything.

4. What has been the response of the state to Itai’s disappearance and do you feel this has been adequate?

The response of the state has been pathetic. For starters, several high ranking government officials, including George Charamba (President Robert Mugabe’s spokesperson) and Jonathan Moyo (Zimbabwe’s former information minister now higher education minister) have openly mocked Itai's disappearance. Some other government officials have even gone as far as saying Itai staged his own disappearance to gain attention which is false. So there is nothing much to expect from the government when they make careless and irresponsible postures.

The Parliament has also blocked and postponed several motions by the opposition party to debate the whereabouts of Itai in the House of Assembly.

We complied with the law and opened a missing persons’ case with the police but as far as the purported investigations by the police are concerned, they have been useless leaving much to be desired. What is curious is the fact that the police have failed to come up with even a single lead or explanation regarding Itai's disappearance. All they have done is inform local media of Itai Dzamara as a missing person. For a police force that is said to be one of the most efficient in Africa to fail to come up with at least one lead or explanation only cements our position that they know about his enforced disappearance.

Last year in March we went to court to force the police to reveal to the family what their progress was in terms of the investigation. High Court Judge Justice David Mangota issued an order directing authorities to investigate, establish Itai’s whereabouts and update his family and lawyers on progress but this has not been fully complied with.

Recently the Dzamara family wanted to hold a peaceful march to commemorate the one year anniversary of Itai’s disappearance but the police barred this from taking place saying the march would “infringe on other people’s rights”. With the assistance of the Zimbabwe Lawyers for Human Rights we approached the High Court and won an interdict that allowed the march to take place. The march was a success with many ordinary Zimbabweans supporting us on the day. We are grateful to them for their bravery.

5. What has since happened to Itai’s movement Occupy Africa Unity Square?

They are still progressing with the vision although the untimely departure of their leader has impacted on them negatively.

6. What can international civil society do to help in Itai’s case?

They must continue making noise over his disappearance on the international scene and they must continue to put pressure on the government led by President Mugabe to account for Itai's whereabouts.