Sri Lanka: Release Hejaaz Hizbullah and others denied due process under abusive law

We, the undersigned organisations express deep concern for the ongoing detention of lawyer and minority and civic rights activist Hejaaz Hizbullah, who has been held under Sri Lanka’s notorious Prevention of Terrorism Act (PTA) for 15 months. In the absence of any credible evidence presented before a court of law, Hejaaz Hizbullah should be released immediately and unconditionally. 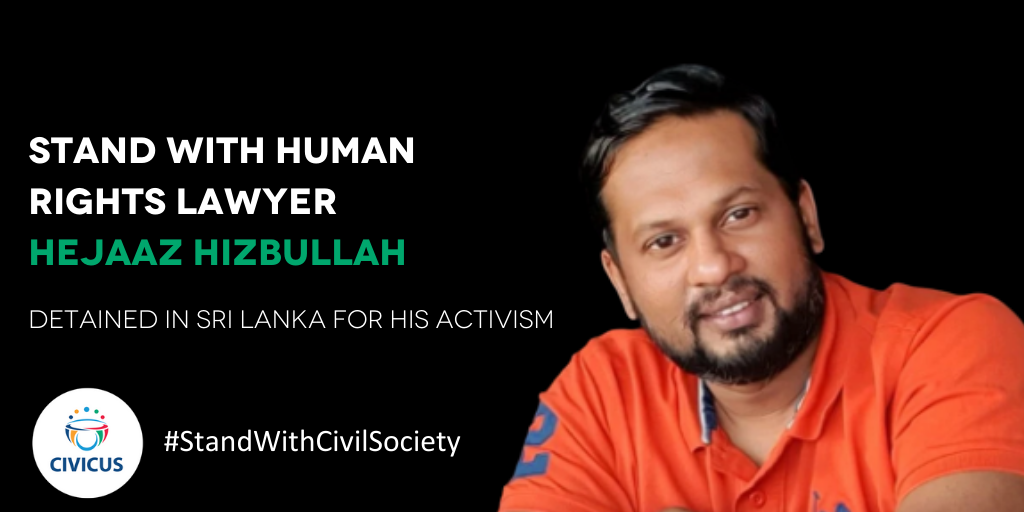 Hejaaz Hizbullah was arrested on April 14, 2020 under the PTA. He was accused by the police of aiding and abetting Inshaf Ahamed (who was involved in the April 21, 2019 bombings), an accusation that has since been withdrawn. Since Hejaaz Hizbullah has been in detention the allegations against him have changed several times and his detention has been extended for over 15 months.

The latest allegation on which an indictment was filed against Hejaaz Hizbullah in the High Court on February 18, 2021, is a speech-related offence of “causing communal disharmony,” one of a number of overly broad offences provided under the PTA. The indictment is based on a statement to the Criminal Investigation Department of the police made by a child regarding a speech allegedly made by Hizbullah in Puttalam. Other children who were questioned at the same time by the same officers filed fundamental rights cases claiming they were coerced by police officers to falsely implicate Hejaaz Hizbullah. Combined with the repeated changes in the allegations, this leads us to believe the allegations against him are unsupported by any credible evidence.

The PTA allows for the prolonged incarceration, based on mere suspicion, of any person who “causes or intends to cause commission of acts of violence or religious, racial or communal disharmony or feelings of ill-will or hostility between different communities or racial or religious groups.” The same provision has been used in the past to prevent and effectively punish the exercise of freedom of expression particularly critics of the government, including journalists.

Hejaaz Hizbullah is a vocal critic of the government. He is a minority rights advocate in a climate increasingly hostile to Sri Lanka’s religious and ethnic minorities. He is also one of the lawyers who challenged the dissolution of the parliament in 2018 in the Sri Lankan Supreme Court. Since the Sri Lankan authorities have so far been unable to show any evidence of wrongdoing, it appears he is being targeted solely for exercising his right to freedom of expression. We call for Hejaaz Hizbullah’s immediate release and for the charges against him to be dropped.

Since the time of his arrest Hejaaz Hizbullah has been repeatedly denied the right to due process safeguards recognized by international law. He was not informed of the reason for his arrest and has been held in prolonged administrative detention without judicial oversight to monitor his wellbeing, without access to bail. While in police custody he was prevented from accessing his legal counsel in private until an order was made by the Court of Appeal. In February, he was charged and moved to judicial remand custody, where he was able to speak with his family for the first time in 10 months. Thereafter visitation rights were restricted, and he has not been allowed any access to his family or counsel since April 2021. Under international human rights law, particularly under article 9 of the International Covenant on Civil and Political Rights (ICCPR) to which Sri Lanka is a state party, all detainees have a right of reasonable access to their family and lawyers.

Hejaaz Hizbullah is one of many people detained for inordinate lengths of time without due process under Sri Lanka’s draconian counter-terrorism laws. In a study published in December 2020, the Human Rights Commission of Sri Lanka found that many PTA prisoners were in remand for up to 15 to 20 years. This is abuse of detainees held under the PTA and is a flagrant violation of the right to liberty and the right to a fair trial, as protected under articles 9 and 14 of the ICCPR. Many PTA detainees have also been allegedly tortured or ill-treated in custody.

We are deeply concerned by Sri Lanka’s continuing use of the PTA to enable arbitrary detention, despite commitments made to repeal the Act. The government of Sri Lanka should: