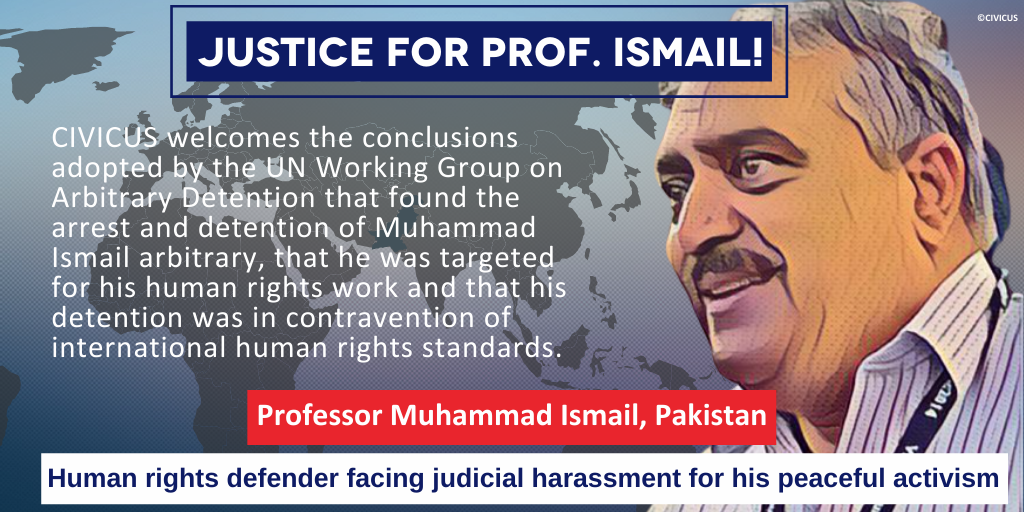 CIVICUS, the global civil society alliance, welcomes the conclusions adopted by the United Nations Working Group on Arbitrary Detention that found the arrest and detention of Muhammad Ismail arbitrary and calls on the Pakistan authorities to immediately and unconditionally put an end to all acts of harassment against Muhammad Ismail and his family.

The UN Working Group, in its opinion adopted in September 2021, concluded that Muhammad Ismail was targeted for his human rights work and that his detention was in contravention of international human rights standards, particularly the Universal Human Rights Declaration (UDHR) and the International Covenant on Civil and Political Rights (ICCPR), of which Pakistan is a state party.

Among the key findings of the UN Working Group was that:

“The conclusion by the UN Working Group echoes concerns raised by CIVICUS around the arbitrary detention of Muhammad Ismail and the ongoing persecution against him. Human rights defenders in Pakistan should not be harassed and intimidated for doing their work and exercising their fundamental freedoms. Ismail’s treatment highlights the repressive environment for activists in the country,” said Josef Benedict, Asia Pacific researcher for CIVICUS.

Muhammad Ismail, a Pakistani human rights defender and the father of women’s rights activist Gulalai Ismail, has been subject to judicial harassment since 2019. He is facing allegations of cybercrime for speaking against government institutions. He has also been accused of trumped-up charges related to sedition and conspiracy, as well as under the Anti-Terrorism Act for allegedly financing terrorism, publishing and disseminating anti-State material and aiding and abetting terrorist offences.

In the report, the UN Working Group also noted with concern the charges reportedly brought against Muhammad Ismail’s spouse, as well as actions taken against Gulalai Ismail, his daughter, for her advocacy in support of the Pashtun community. It recommended that the government of Pakistan conduct a full and independent investigation on the arbitrary detention of Muhammad Ismail and to take appropriate measures against those responsible for the violation of his rights. The Working Group also called on the government to provide a remedy without delay. While the Working Group has sent a communication to the government of Pakistan concerning the circumstance, it has received no reply.

“We urge the Pakistani authorities to comply with the recommendations from the UN Working Group, in particular by immediately ending all acts of harassment against him and his family and ensuring an independent investigation into the abuses against him,” said Benedict.

“The decision by the UN Working Group shows clearly that my father was arrested for speaking up and supporting my activism. He has suffered tremendously over the last two years for this. I urge the authorities to drop all charges against my parents unconditionally. Speaking out for human rights is not a crime” said Gulalai Ismail.

Muhammad Ismail is one of the faces of CIVICUS’s international #StandAsMyWitness campaign, calling for the release of imprisoned human rights defenders across the world.

The CIVICUS Monitor rates civic space in Pakistan as “repressed”