Anabel Cruz- Director of ICD and Former CIVICUS Board Chair 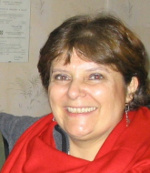 Anabel Cruz is the Founder Director of the Communication and Development Institute (ICD) of Uruguay, a civil society organization and private centre with more than 26 years of experience in strengthening civil society and citizen participation, by means of research, training, capacity building and dissemination of information activities in Latin America and worldwide. ICD is a leader in the promotion of accountability and transparency of civil society and other actors. She has published several books on civil society and development and her articles have appeared in journals in Latin America, the United States and Europe. She was the Chair of the Board of CIVICUS: World Alliance for Citizen Participation 2006-2010 and is currently the Co-coordinator of the Regional Initiative “Rendir Cuentas”, the Chair of the Partnership for Transparency Fund, PTF and a Board member of Humanitarian Accountability Partnership, HAP International.

Gender at CIVICUS: progress underway!
It is not an easy task to be a woman activist or a woman leader in society in general, and the same difficulties are often faced within civil society, within our organizations and networks, and in our relationships with our multiple stakeholders. We are probably not treated differently in our daily work with our colleagues, but that has been in itself a long struggle.  But we are still treated differently in many contexts, there are still rights that are banned for us women, there are still places where women don’t have a strong presence. For instance, political participation of women, measured in the proportion of female lawmakers and legislators, or women that are ministers, presidents or chief of states, give us the clear proof that there is still a long way to go.

Gender at CIVICUS has not always been as it is today. It has also been an important process inside the organization to incorporate a gender perspective. I must say also that at CIVICUS it was a question of breaking the glass ceiling, and it has been a fight and an achievement of both male and female colleagues. Probably one of the most important demonstrations of change was at board level, with Aruna Rao elected in 2004 as the first woman ever Chair of the Board and during her tenure the gender policy of CIVICUS was approved. Since then, CIVICUS had another woman as Chair (and I happen to have had that honour) and a Secretary General, Ingrid Srinath from 2008 to 2012, many excellent women had lead programs and projects, many members fight for women rights and women issues.

The glass ceiling is still there, but it already has a million cracks and it is a leading example for other organizations around the world. CIVICUS should continue advancing and progressing in promoting women’s rights, because these are fundamental human rights.