Nabila Hamza- CIVICUS Board Member and President of the Foundation for the Future, (FFF) 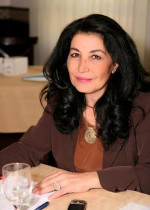 Mrs. Nabila Hamza is the President of the Foundation for the Future, (FFF) an independent, international nonprofit organization established in 2005. She has dedicated herself fully to the mission and detailed activities of this important organization, with a firm devotion to support the civil society initiatives in their efforts to promote democracy and human rights in the BMENA region. The Foundation for the Future remains profoundly committed to enhancing and strengthening Civil Society Organizations (CSOs) in their efforts to advance democracy building and Human Rights protection. Thus, in recognition of her significant role in the Foundation’s continuing efforts to support civil society initiatives, the Arab Pioneer and Innovators Forum granted an award to honor Ms. Nabila Hamza in December 2009. This award promoted the dissemination of information on the Foundation’s achievements as a reliable and credible partner to civil society organizations for the promotion of human rights and democracy in the region. Also, in November 2011 the Arab-European Center of Human Rights and International Law honored Mrs. Hamza by its 2011 “Arab Human Rights Award” for her dedicated efforts towards enhancing the principles of Human Rights. Prior to her work at the Foundation for the Future, Mrs. Hamza served as the Executive Director of the Center of Arab Women for Training and Research (CAWTAR), a regional center based in Tunisia and funded by UNDP, UNFPA and IPPF. She has worked as an Expert in the Arab League for 10 years.

Mrs. Hamza is a well-known and respected researcher in social and political science and is an expert on gender issues. She holds an MA in International Relations and Political Science from the University of Sorbonne in Paris. She has published and contributed to a wide range of books and articles on public policies, social development, good governance, gender issues, poverty alleviation, and employment in the Arab region. She participated in the elaboration of the first Arab Human Development Report, issued by UNDP.

Moreover, Mrs. Hamza has been a founding member of several women's rights and development association through which she acquired a wide knowledge of civil society organizations in the Arab countries.

Growing up at the beginning of the Bourguiba era, Tunisia had just achieved independence and excitement for the future was palpable.  It was the beginning of a new era, especially for women.  In spite of the conservatism and patriarchal system that still ruled Tunisian society in that time, I had the chance to belong to a very open-minded family.  My father and my mother never differentiated between their 5 daughters and 2 sons in terms of access to education and other opportunities.

Though I later became involved in the anti-regime movement, I still respect Bourguiba’s pioneering thinking and all he did to establish a basis for Tunisian women’s rights, from reforming family law to ensuring access to education, reproductive health, and abortion long before European countries granted this right.  In fact, I even have a picture of myself at 6 years old, when I pushed through a crowd of thousands at a political rally for this new president to throw myself at his feet onstage and honor his leadership.  To remind myself of all the conservative threats we are facing and the truth of Bourguiba’s vision even today, I keep this picture on my desk.

My civil society activism started very early in cultural and scientific NGOs.   Years later, I became involved in politics when I entered university.  In fact, the university was the only space open to political participation under a regime that persecuted any kind of political activity.  At the time, leftism was popular on campuses throughout the world, and as the Vietnam War wore on, we imagined ourselves the founders of a new anti-capitalist, anti-imperialist society, without class, poverty, or discrimination. However, as I was also very sensitive to discrimination against women and religiously read the literature coming from the Liberation movement abroad, I began to identify as part of the global feminist movement. I grew disillusioned with the leftist movement, as most male leaders of the leftist movement at that time considered women’s issues secondary to their mission.  So, I and many of my female compatriots broke off and formed our own feminist movement.

Our “radical feminist” movement was informed by the “second wave” of feminism and our motto was “the personal is political.”  In our opinion, women’s public and private lives are interconnected.  If women could not be independent at home and make her own decisions regarding her domestic role, marriage, and body, she could not be independent outside the home.  Therefore, our struggle was actually on both fronts, private and public.  We were fighting to improve the Tunisian family law and we also were advocating for women’s full participation in public life.  In doing so, we were in total opposition to the official women’s feminist movement that had been co-opted by the Ben Ali regime.

We understood ourselves as part of a global movement and endeavored to build international solidarity with movements in other countries, a tradition I continued by participating in Parisian movements during my Masters studies at the University of Sorbonne.  However, I also grew to recognize that there was no one size fits all solution for all countries, and as a founding member of the Arab Women’s Center for Training and Research, I learned to adapt my mission and vision to each part of the Arab region.

Tunisian feminists today are facing other challenges. Although women were on the front lines of the recent revolutions that spread throughout the Arab region, progress towards gender equality has actually been reversed.  So vigilance is our main goal today, and women’s CSOs have a lot to do.  We need a change not only in the political structure, particularly in constitutions and electoral law, but also in the way we do politics.
In going forward, Arab women must be careful to build national, regional and international coalitions and networks.  Solidarity with other women’s movements is essential, because it is much more difficult to isolate and silence a movement than a handful of activists. We must also discuss the tools that are useful for other powerful movements.  Collective activism, networks, education, media, protest and alternatives can all help women activists in their struggle to have their demands met.

Women in the region need to achieve consensus on common issues and build coalitions to ensure that the promises that politicians made to gain women’s supporting during the transition are actually translated into concrete action.  We need new blood and new expertise, and an elite women’s movement has to become a popular one.  Intergenerational dialogue is a must, as many young Arab human rights activists today do not prioritize women’s issues.  In spite of the challenges, however, I am hopeful for the future and believe that now that the Arab Spring has broken open the doors to female participation, they will never be closed again