Amidst a flurry of high-profile elections this week, it will be Myanmar’s turn to go to the polls on 8 November. Nearly 100 political parties are contesting the country’s general election, with the upper and lower houses of the national, state and regional governments all to play for.

This will be the second election in Myanmar since the end of military rule in 2011. But the contrast between the two could hardly be starker. While the 2015 elections saw a landslide victory for Aung San Suu Kyi’s National League for Democracy (NLD) amid a groundswell of hope for democratic progress and human rights change, the upcoming election will take place in an environment of ongoing serious human rights violations, escalating attacks on democratic freedoms and discriminatory policies.

The conditions for free and fair elections depend on an open civic space, where voters have access to information, can enjoy freedom of expression and opinion, and are able to organize and gather. Countries that purport to be democracies have a responsibility to ensure that these conditions are met, so that people can truly have a say in their own governance.

But in Myanmar, these conditions are in short supply. 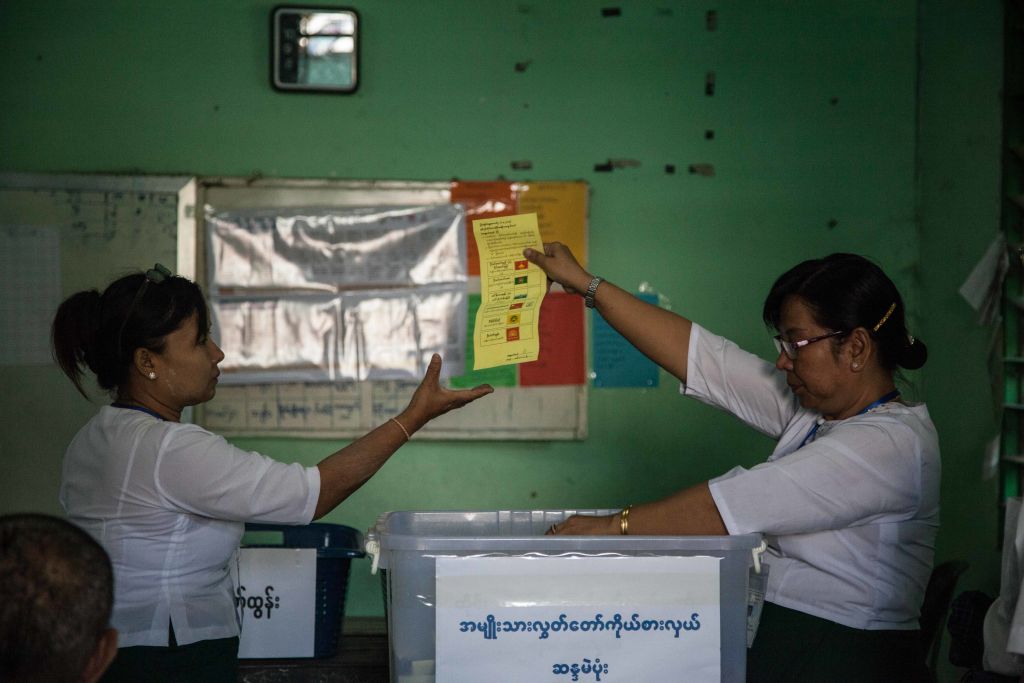 As the CIVICUS Monitor has documented, there has been a sustained attack on civic space in the country over the last few years. Human rights defenders, journalists and critics have been criminalized and attacked for speaking up about human rights violations. A raft of old draconian laws are deployed by the government and military to silence dissent.

This already has created an unhealthy environment for elections. However, in the run-up to the election, authorities have compounded this by actively targeting electoral processes.

For example, Myanmar’s Union Election Commission (UEC), which has been accused by human rights groups of making critical decisions without transparency, has censored the speeches of political parties that want to broadcast campaign materials on state-run TV and radio networks. The election commission’s stringent guidelines on the content of speeches means that criticism of government policies by opposition parties has essentially been banned from state-run airwaves, denying voters crucial information.

Government-imposed internet restrictions in Rakhine and Chin States – which have now lasted for more than a year – has had a serious impact on the ability of voters in the affected areas to access information about candidates, parties, and their positions.

The government’s response to COVID-19 had a negative impact on media freedom, affecting the ability of the electorate to be informed. Journalists and media workers have been declared a nonessential business and face travel restrictions due to the government’s strict stay-at-home orders, hindering comprehensive coverage. Four national newspapers – the Standard Times, 7 Day Daily, the Myanmar Times, and the Voice Daily – announced their decision to suspend circulation of their newspapers from 23 September 2020. Notably, the publication of state-owned newspaper will not be affected.

Most egregiously, though, the Myanmar government is preventing people from voting or from standing for election altogether.

It has systematically and deliberately disenfranchised voters from ethnic minorities, using the discriminatory 1982 Citizenship Law and the Election Law to prevent Rohingya candidates from running for office, even though most Rohingya families have lived in Myanmar for generations.

They include Abdul Rasheed, a Yangon resident whose father was a civil servant and who was born and has lived his whole life in Myanmar. Kyaw Min, the chairperson of the Democracy and Human Rights party, has also been barred despite having run in the 1990 election and spending years as a political prisoner alongside thousands of NLD activists and others.

The authorities have barred an estimated 600,000 Rohingya from registering to vote in the election. None of the million Rohingya who fled genocide in Myanmar for neighbouring Bangladesh will be allowed to vote. This adds yet another layer of repression and discrimination on a community that has experienced ethnic cleansing and a systematic denial of their rights in recent years.

Voting has been suspended or cancelled in various constituencies in Kachin, Karen, Mon, Rakhine, and Shan States, and the Bago Region, with the election commission citing security concerns. As a result, over 1.5 million people will not be able to vote.

It is a common feature of would-be autocrats to attempt to suppress the votes of those who disagree with, or are negatively impacted by, their policies. Myanmar is not the only country to attempt to do so; it is not even the only country to have done so this week. But for a country where optimism for change and freedom shone so brightly five years ago, this represents a bleak failure of democratic progress.

The two elections, five years apart, have bookended a downward spiral into gross human rights violations, attacks against dissenters, and a curtailment of democratic freedoms. While some countries have spoken up and stood by human rights defenders and victims of violations, other countries, particularly in the Southeast Asian region, have failed miserably to call out Myanmar on its actions.  Whatever the outcome of this elections – marred already by acts of censorship, racist voter suppression and other restrictions – we all must redouble our efforts to support civil society and activists to reverse the democratic regression we have witnessed since the 2015 elections.