From 2 to 15 December, more than 20,000 people from almost 200 countries attended COP25, the UN climate change conference. The meeting was held in Madrid, Spain, under the Presidency of Chile, which abruptly withdrew from hosting the conference in Santiago one month before the conference took place. 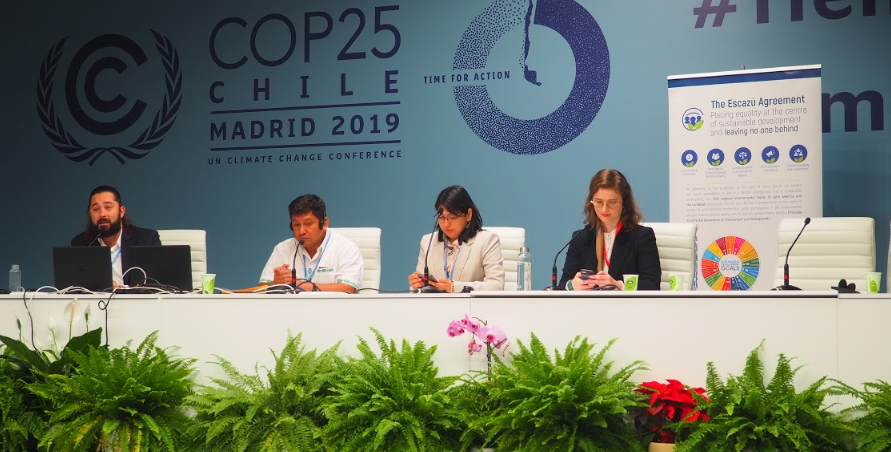 In a year when millions of people have mobilised to call for international cooperation on climate change, it is symbolic that COP25 was unable to find a host in South America, after both Chile and Brazil withdrew. CIVICUS new position paper ‘We will not be silenced: Climate activism from the frontlines to the UN’ published just before COP, details the different ways that the UN is failing to adequately respond to and  protect the growing climate movement.

CIVICUS participated at the official COP as well as civil society alternate COPs in both Madrid and Santiago with a focus on improving youth participation and protecting environmental defenders.

On 12 December, CIVICUS co-organised an official side event at COP25. The event was live-streamed by UNFCCC and can be viewed here. Former President of Ireland and Chair of the Elders Mary Robinson delivered a keynote speech highlighting the centrality of human rights to climate action and urging governments to ratify the agreement. Speakers at the event included representatives from UN ECLAC (UN Economic Commission for Latin America and the Caribbean), the governments of Costa Rica and Mexico, COICA (Coordinadora de las Organizaciones Indígenas de la Cuenca Amazónica), DAR-Peru, FARN-Argentina, and CIVICUS.

During COP25, Panama and Colombia both moved closer to ratifying Escazu following pressure from civil society. as December 22 countries have signed the treaty, Colombia signing during COP,  and 5 have ratified it.

Following a year of unprecedented public mobilisation for climate action, COP25 was no exception with Indigenous, youth and civil society delegates staging sit-ins and a “cacerolazo” during proceedings. Unfortunately, at least one of these civil society interventions was met with undue force from UN  and private security guards, as detailed in this joint civil society statement.

More than 130 CSOs from Chile organized around the Civil Society for Climate Action Platform (SCAC) to put together an alternative COP that showcased civil society voices. Despite the change of venue, the summit was held with less participation from international civil society groups but with more energy from latin american groups, especially those from Chile. In the current context of social protests around the region the summit was an important space for solidarity and to lift the voices of those more affected by the climate crisis. Civicus was invited to be part of SCAC’s international advisory group.

SCAC worked for several weeks with various groups from Latin America to create a declaration that highlighted the needs from the region in terms of climate action. The declaration was officially launched on Monday 9 both in Santiago and Madrid. Civicus was invited to speak at the launch.

Launch of the SCAC Declaration:

Note on the launch event: https://www.porlaaccionclimatica.cl/las-voces-de-latinoamerica-se-unen-sociedad-civil-lanza-manifiesto-climatico-latinoamericano/

On December 10 and commemorating Human Rights Day Civicus participated in the side event “El Acuerdo de Escazú: La deuda de Chile con los Derechos Humanos”. In this opportunity we reflected on the different civic space restrictions climate and environmental defenders are facing in the region and in Chile as reported in our position paper and why Escazu Agreement is an important tool for the protection of defenders.