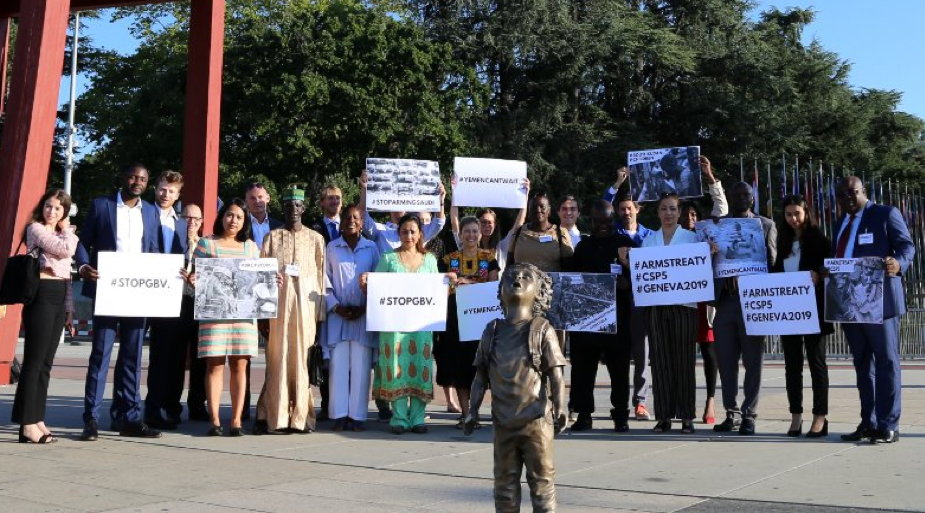 It was quite surprising to hear that the 2019 Conference of States Parties to the Arms Trade Treaty (ATT) would focus on gender. What is the connection between gender and weapons, and between women’s rights and gun control?

The thematic focus of the Sixth Conference of States Parties to the ATT (CSP6) on gender and gender-based violence (GBV) was the result of long-term efforts by progressive governments and civil society who called for more integration in the areas of sustainable development, women, peace and security and arms control. Building on the fact that the ATT is the first legally binding instrument to recognise the link between GBV and the international arms trade, efforts were concentrated on ensuring that governments recognise the importance of stopping arms transfers that perpetuate GBV and creating gender-sensitive arms control policies and programmes.

A gender perspective in arms control requires governments to examine how socially constructed gender roles affect policy decisions, particularly related to arms exports and controls. It also requires a better understanding of the gendered impact of armed violence and conflict, including of how women and men are impacted on, due to their sex or prevailing expectations about gender. It must be noted here that gender is not limited to women and girls but also includes men and boys and LGBTQI+ people.

While the body of evidence that connects women and peace and security with arms control policies is continually growing, several studies outline the disproportionate effect of irresponsible arms transfers and arms proliferation on women and children and the gendered impact of modern armed conflicts. While men and boys are both perpetrators and the primary victims of armed violence and conflict, women and girls bear a substantial and differentiated burden, including because of GBV, displacement and lack of access to medical care during pregnancy and childbirth due to the destruction of medical facilities. Research on the gendered impact of conflict also indicates that bombs, missiles, mortars and rockets, when used in populated areas, result in disproportionate casualties among women and children.

Therefore, Control Arms – along with other civil society organisations following the ATT process – has been urging governments to go beyond examining the risks that transferred arms may be used to commit violations of international human rights and humanitarian law, and look at the gendered impact of the use of weapons as part of a thorough examination of the potential for GBV facilitated by transferred arms. This is an essential component in reducing human suffering, the key purpose of the ATT.

While gender and GBV are beginning to be receive proper recognition by various United Nations mechanisms, including in disarmament forums, what is more important is to see meaningful action on the ground. In the case of the ATT, Control Arms hopes that states parties will base arms export control decisions on the recognition of the risk of commission or facilitation of GBV. The Control Arms practical guide on how the ATT can address GBV was specifically designed to help states parties implement GBV criteria effectively when conducting a risk assessment before authorising an arms export, and help push for meaningful change by using the ATT to address GBV.

Can you tell us more about the ATT and the role played by Control Arms in its negotiation and implementation?

The ATT, which was adopted in 2013 and entered into force on 24 December 2014, is part of the international response to the tremendous human suffering caused by the widespread proliferation of conventional weapons and poorly regulated trade in them. The ATT sets common international standards for the transfer of conventional arms and ammunition, with the express purpose of reducing human suffering. The ATT represents a significant paradigm shift in the world of arms control through its prohibitions on certain arms transfers (Article 6) and the establishment of a detailed export risk assessment mechanism (Article 7). Under these articles of the Treaty, states parties must determine if an arms transfer would violate specific international obligations or arms embargos or if the arms would be used to commit or facilitate genocide, crimes against humanity, war crimes, serious human rights or humanitarian law violations, to enable terrorism or organised crime, or to commit or facilitate GBV, and stop it in case it risks having any of these consequences. With the inclusion of Articles 6 and 7, for the first time in history, states are required to place international human rights and humanitarian law at the core of their arms export decisions.

The Treaty also sets out guidelines for importing, transit and transhipment states, requiring them to cooperate and share the information necessary to conduct the mentioned assessment.

The Control Arms Coalition formed and launched a campaign in 2003 that tirelessly pushed for states to accept the idea of and negotiate the first global treaty to regulate the conventional arms trade. Since the adoption of the ATT in 2013, Control Arms has continued to push, first, for the 50 ratifications required for its entry into force, and then to hit a target of 100 states parties and for effective implementation. Through each stage of the ATT process, the role of civil society has evolved from primarily one of advocacy and awareness-raising to where we are today – where civil society plays an instrumental role in shaping the discussions and agenda of the Conferences of States Parties, advancing the Treaty’s universalisation and implementation, and ensuring transparency and accountability in the ATT through mechanisms such as the Control Arms’ ATT Monitor Report.

What does the Arms Trade Treaty say about GBV, and how could its provisions be used to protect women and children?

The aim of Article 7.4 is to ensure that an exporting state party takes into account the risk that the arms transferred will be used to commit or facilitate acts of GBV, when conducting its export assessment outlined in Article 7.1. It is an explicit requirement aimed at reducing the historical tendency to overlook GBV.

What kind of advocacy work has Control Arms been doing in the area of GBV?

The Control Arms Coalition played a key role in advocating for the inclusion of Article 7.4 in the Treaty. Since then, Control Arms has sought to raise awareness about the importance of this provision, through bilateral and regional meetings, social media campaigns such as 10 Reasons to #StopGBV, and interventions and statements in ATT-related meetings.

Control Arms also produced a range of resources such as the Practical Guide on how to use the ATT to address GBV, a paper that provides interpretations on key terms from Article 7 and a factsheet on gender in the ATT. These resources were used in the first-ever training programme for export control officials on the implementation of the GBV criteria. Organised by Control Arms and the government of Latvia, the training session brought together representatives from 12 Central and Eastern European governments to learn in greater detail about the links between GBV and arms transfer decisions and the application of the ATT risk-assessment criteria that take these risks fully into account.

Do you think women’s participation in disarmament and arms control negotiations and processes could increase the prospects for peace?

Greater women’s participation in male-dominated disarmament and arms control mechanisms would without a doubt contribute to greater prospects for peace. Several studies, for example by the Council on Foreign Relations and a 2018 study by Jana Krause, Werner Krause and Piia Bränfors, highlight the positive impact of women in conflict resolution, concluding that “women’s participation in conflict prevention and resolution can improve outcomes before, during, and after conflict.” Similarly, gender equality among participants in international multilateral mechanisms can lead to more inclusive, effective and sustainable policy outcomes. This is relevant particularly for disarmament and arms control forums that have remained largely male-dominated and are stuck in an ideological window characterised by aggression, dominance, egotism and other characteristics of toxic masculinity.

A recent study by the United Nations Institute for Disarmament Research, Still Behind the Curve, outlines the state of gender balance in arms control, non-proliferation and disarmament diplomacy. Its main conclusion is that “the proportion of women participating in arms control, non-proliferation and disarmament diplomacy… has grown steadily over the last four decades, but women remain underrepresented.” This applies to the ATT as elsewhere: only 27 per cent of representatives at the 2018 Conference of States Parties were female.