In July 2019, the VUKA! Coalition, a group working to coordinate civil society actors to reclaim civic space across the globe, supported VUKA! ally Alternativas y Capacidades to bring together 25 CSOs from across Mexico for a pilot workshop on strategies to counteract the stigmatisation and demonisation of civil society in the country. 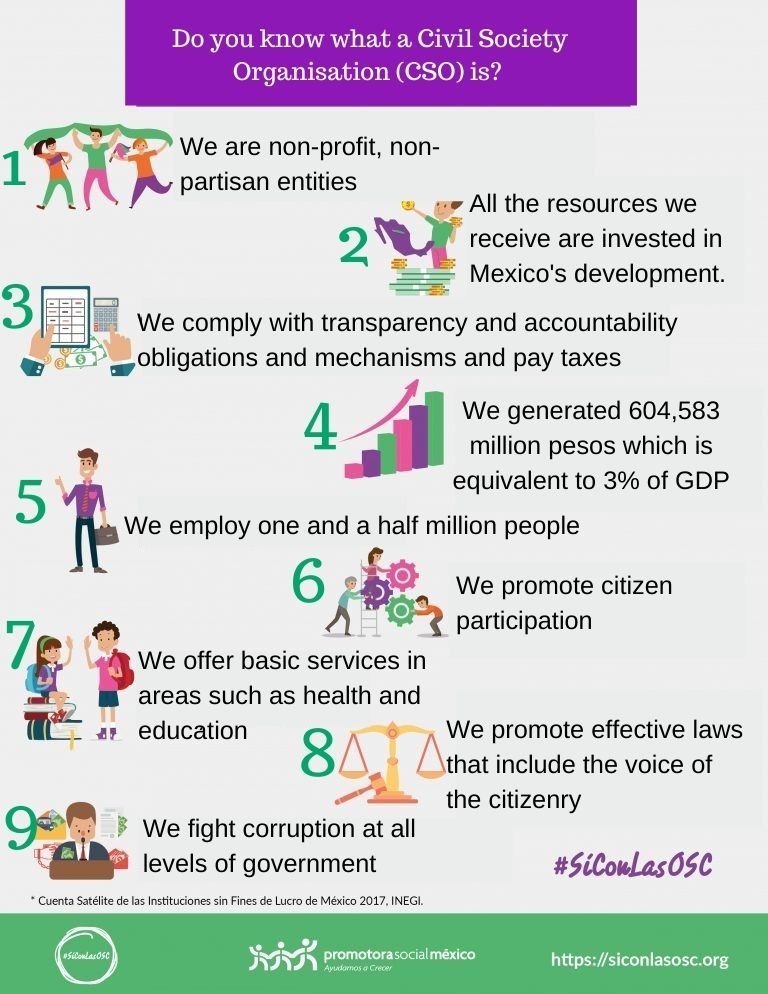 There is a growing perception of insecurity and corruption in the country, which has affected everything, including public perceptions of CSOs.[1] Mexico’s corruption index, as announced by Transparency International, is one of the worst in the region.[2] Furthermore, the CIVICUS Monitor lists Mexico’s civic space as “Restricted”, with many CSOs facing surveillance, harassment and intimidation from the government or other non-state actors like organised crime groups like the drug cartels.[3] One tactic used by actors who are trying to avoid scrutiny from CSOs is to undermine their legitimacy via campaigns to discredit their work and leaders, which has contributed to a narrative that CSOs are also part of the country’s corruption problem.

Therefore despite a fairly strong institutional framework on paper, much of the country continues to lack a political and legal culture in which CSOs are able to operate freely and hold decision makers to account.[4] In order to maintain their independence from those in power, there is therefore much onus on CSOs to be transparent and rigorous in their approaches, as well as vigorously defend their space and access to resources.

Against this backdrop, the workshop brought participants together to explore ways to directly confront the discrediting messages they face. This included via campaigns to share impact stories through videos and other accessible formats, to change the narrative about the role and work of Mexican civil society. As a next step, allies in Mexico created a civil society campaign called #SiConLasOSC (Yes with CSOs), which currently involves more than 200 groups. In particular, #SiConLasOSC aims to rebuild trust and awareness of the role CSOs play in the community and the positive effects their work has in the country.

For example, CSOs are currently generating the equivalent of 3% of Mexico’s GDP and reinvesting that money in promoting social welfare, providing public services such as education and health to vulnerable population groups, renewing and safeguarding the environment, and preventing domestic violence directed towards women and children.[5]

One of the coalition’s strengths is the diversity and plurality it represents, with a presence throughout the country, and most importantly, a clear understanding of the needs of the population. Now more than 1.5 million people work for organisations involved in the campaign, who have a further 2 million volunteers all around the country.

They have gained legitimacy by listening to those communities they seek to represent, but also by working together they have generated fresh momentum for their respective causes. The organisation Fondo Guadalupe Musalem, for instance, which advocates for women’s rights, is helping members of indigenous groups to access formal education. Whereas another organisation, ASHOKA, created an alliance with American Express to host a workshop on Social Entrepreneurship for Development, in order to address needs related to income generation identified by the communities they work with.

The support these organisations give to the excluded communities has proven to be effective in reclaiming spaces and overcoming previously hostile attitudes and perceived connections to the corruption and waste that continues to contribute to poverty, violence and lack of access to health and educational services.

By bridging divisions, offering support, and fighting government laws that promote the use of “legitimate” force against protests, for example, the organisations involved in the campaign are attempting to strengthen a culture of citizen participation, accountability, and create a sense of community. Furthermore, the coalition has accrued legitimacy by constantly demonstrating how they are spending and investing their money, and explicitly communicating how their activities are helping community-embedded CSOs in Mexico to flourish. And, in doing so, they continue to say “yes with CSOs” and the fight for further public support. #SiConLasOSC!