Following a year marked by massive mobilisation on the climate emergency, CIVICUS is interviewing civil society activists, leaders and experts about the main environmental challenges they face in their contexts and the actions they are taking. CIVICUS speaks with Sharif Jamil, an environmental activist and the General Secretary of Bangladesh Paribesh Andolon (BAPA), a platform that organises civil society movements against environmental degradation. Since 2009 Sharif has been involved with the Waterkeeper Alliance, a global network aimed at ensuring every community’s right to clean water, and he is currently the Coordinator of Waterkeepers Bangladesh. 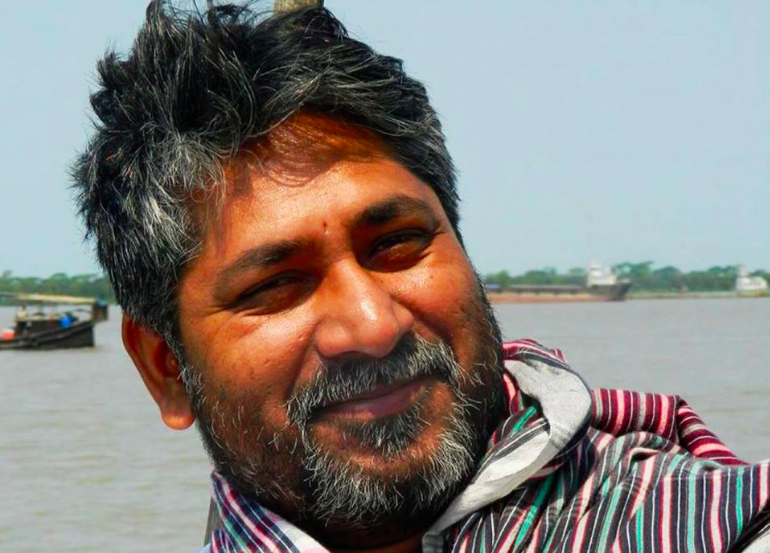 What is the key environmental issue that you work on?

The Waterkeeper Alliance is a global platform and network that now includes over 400 organisations in 40 countries across the globe. We protect the water bodies that we all need and use, but that cannot speak for themselves. We call for people to respect water bodies and defend their rights, so when a waterkeeper speaks it is as if a water body spoke.

We focus on water, but we don’t work only on water, because if there is no rainforest there is no water, if there are no mountains there is no water: if you don’t preserve the environment and ecology as a whole, then the water is also in trouble. So our water protection movement is not limited to protecting water bodies.

We have launched a global campaign because water does not respect borders, so it needs to be protected globally. Climate change and global warming are threatening the entire planet, and we need the planet to come out of this crisis as a whole.

While thinking globally, you are also acting locally. Can you tell us about the work you are doing in Bangladesh?

I started my activism 20 years ago. BAPA was formed in 2000 at an international conference on the environment in Bangladesh. The conference was held to discuss what we could do for the environment from the civil society level. It was agreed that civil organisations were doing good work but a platform was still needed for all of them to act as a unified pressure group, to bring the conflict to the table and apply pressure to come up with a solution. When BAPA started, we prioritised the issues directly affecting the environment in Bangladesh, but as rivers do not follow political boundaries, we realised that protecting water amounts to protecting basic human rights in all nations. That is why I also got involved with human rights organisations and members of a human rights group based in Colombo, Sri Lanka, and we are now tracking human rights violations related to ecological degradation.

Specifically in Bangladesh, in recent times, we are focusing our work on the conflict between fossil fuels, the energy system and environmental degradation. In 2010 the government updated a power system master plan required for the country to grow economically. The government decided to focus on industrialisation, so it formed a special economy zone authority and declared more than 100 special economic zones across the country. These were meant to attract investment from foreign investors and to facilitate the establishment of multinational companies in the country. Industry requires energy, so to foster industrialisation the government came up with a plan to produce the power that it estimated would be required up to 2030. In order to meet the requirement, it decided to increase dramatically the share of energy produced from coal, from 2.5 per cent of total electricity to over 50 per cent. The government made this decision just as the world was shifting away from coal because of global warming.

At this point there were civil society reactions, but initially we did not know enough. We lacked information, expertise and funding. But we worked hard to understand how much this master plan would impact on water and climate. With the collaboration of the Waterkeeper Alliance, in 2015 we organised an international conference in Dhaka, ‘Coal energy in Bangladesh: impact on water and climate’, and we came to understand that coal is more of a problem than a solution. The government’s plan identified three major hubs to establish coal-based power plants in the coastal region, and each of those hubs is threatening a unique ecological treasure.

One of them is the Sundarbans, a mangrove area in the delta formed by the confluence of the Ganges, Brahmaputra and Meghna rivers in the Bay of Bengal. The Sundarbans, a World Heritage Site, is the largest remaining mangrove forest in the world. It covers an area of about 10,000 square kilometres in both Bangladesh (60 per cent) and India (40 per cent) and it is the last habitat of the endangered Bengal tiger. The Sundarbans protects the entire nation from cyclone and storm surges because Bangladesh is a densely populated country and is highly vulnerable to global warming, climate change and extreme weather hitting the land from the Indian Ocean. Bangladesh is almost a flat country and is therefore affected by floods. The Sundarbans is a lot more than just a huge forest – it is also a barrier that protects all of our country’s land.

So we started protesting against the Rampal and Orion coal power-plant projects, located only around four kilometres away from the Ecologically Critical Area of the Sundarbans. We first started protesting against the coal-based power developments that were closest to home and then found out that on the other side of the Sundarbans, there were also huge numbers of coal-based power production plants going on in and around Payra, which were also threatening the Sundarbans as well as one of the rarest sea beaches where you can see the sunrise and sunset. And more importantly, thinking about the food security of our nation, the pollution that it causes threatens our national fish, hilsa. This is a fish that migrates from sea to freshwater and from freshwater to sea. The region is one of the major landing stations for this migratory fish and would be entirely destroyed by the coal plants.

What we are trying to do is to reach a balance and understand what we should do and how we can protect this environment while keeping development moving onwards, that is, how we can make development sustainable. But the most urgent thing to do is protecting our water and air from this kind of pollution. We have been organising people’s movements. We are trying to convince our government, doing research and presenting global data and studies to our policy-makers. We are also inviting global investors like China, Japan and the UK to review their strategies. Some of the biggest investors are phasing out coal in their own countries while funding its use in this poor, overpopulated nation. We want the global community to influence and engage global investors to keep development progressing while ensuring that it is done with renewable energy. The global community should understand that producing 5,000 megawatts in Australia is not the same as producing 5,000 megawatts in Bangladesh. We are an overpopulated deltaic country, with more than 1,084 people per square kilometre.

Have you participated in global climate mobilisations?

I was the national coordinator of the climate march in Bangladesh in 2015, when the Conference of the Parties to the United Nations Framework Convention on Climate Change (COP 21) was held in Paris, France. We took people out on the street and had a very good turnout. We held a procession together with other civil society organisations in the capital, Dhaka, and more than 30,000 people participated in the march.

More recently, in September 2019, we mobilised in the context of the global climate strike called by Greta Thunberg. Waterkeepers Bangladesh, Waterkeepers Nepal, the Nepal River Conservation Trust and BAPA jointly organised a series of events and activities in solidarity, including a mobilisation to protect the Himalayas by the banks of the Sunkoshi River in Nepal, near the source of the Brahmaputra and Ganges rivers, on 23 September, and another focused on protecting the Sundarbans, held at Katka Beach in the Bay of Bengal, near the source of the sea, on 29 September.

I also took part in COP 25 in Madrid, Spain, and joined the European Union’s 21st EU-NGO Human Rights Forum in Brussels, Belgium, both in December 2019. Discussions there revolved around building a fair environmental future.

So yes, Bangladeshi people are the victims of climate change, which they face every day, but they are also protecting themselves with their own knowledge and capacity, and reaching out to the global community.

A big problem is that many in the global community are ready to help people with adaptation, but no one is putting enough attention on mitigation. So we request help for Bangladesh not only regarding adaptation to climate change, but also for mitigation, to keep our forest, to protect the Sundarbans, to protect the water bodies. The truth is that if you don’t keep this place alive, the entire region will be in trouble.

The situation is urgent because water is depleting and there are no shared protocols. So we have started efforts within civil society, with people-to-people communication. We are working on the five countries – Bangladesh, Bhutan, China, India and Nepal – to manage the entire Brahmaputra, Ganges and Meghna basins together on the basis of equity and trust. These countries should come up with a treaty or some form of consensus to deal with the problem of melting Himalayan glaciers. Bangladesh is a water-scarce country as we get only 20 per cent of total water over half of the year from upstream during the lean period. When a neighbouring country blocks all the water, water bodies die, agriculture collapses and the economy is destroyed.

Do you think international climate forums provide a useful space for civil society?

I have participated in many global talks; in September 2018 I was even invited as a speaker to the Global Climate Action Summit in San Francisco, USA. The problem with these forums is that sometimes good things are said, but actions do not match words. The government of California was one of the organisers of the summit in San Francisco, but California’s policies are all about protecting themselves while exporting fossil fuels to other countries. It’s irrational to think that you can save yourself alone. What you have to do to protect the planet from climate change is to keep fossil fuel underground. You cannot exploit mines in poor nations and then organise a nice summit to come up with recommendations to solve the problem you have created and that you do not have any intention to implement.

Still, we are invited to these forums and we attend. The former BAPA general secretary was a member of the Bangladeshi government team for the climate negotiations at three successive sessions of the COP. We try to help our government in the negotiations, for instance by providing data and analysis. True, our government still needs to change its mindset and understand that economic growth needs to be sustainable. Our government needs to conduct itself diplomatically while being firm in searching for funding for sustainable development.

But we support our government in international negotiations because Bangladesh is a poor nation and there are many things that our government is not in a position to do or decide by itself; we depend on developed nations in many respects. We understand that responsibility falls on our government when it comes to changing its mindset and becoming more inclusive in its decision-making processes, but it is the responsibility of the global community to come up with a holistic approach to deal with a global problem.