CIVICUS speaks to Human Rights Awareness and Protection Forum (HRAPF) executive director Adrian Jjuuko (pictured) after their offices were broken into recently. He also speaks on the situation of human rights defenders and civil society in general in Uganda. 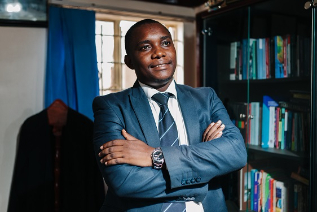 1. Please tell us what happened at your offices on 9 February 2018?

At about 3.00am on the morning of 9 February 2018, a group of about nine unidentified individuals broke into the offices of Human Rights Awareness and Promotion Forum (HRAPF). They jumped over the high perimeter wall surrounding the office, cut the electricity supply and thus affecting the CCTV cameras. They then attacked the guards on duty and the guard dog with iron bars and batons. One part of the group carried on the scuffle with the guards and the dog for close to one hour while the other forced open the main door to the main building and the back door, and triggered the emergency alarm in the process. The guards were able to escape by climbing onto the water tank and jumping into the next compound, sustaining severe injuries including a skull fracture to one of them. They were admitted at St Francis Nsambya Hospital Kampala. The rapid response team from our security providers arrived at the scene and their arrival scared off the attackers who fled. The police also arrived soon thereafter after being called by the neighbours. From the inventory done, nothing was taken from the HRAPF offices.

2. A similar break in also happened at your offices in 2016? Please give more information.

In the early hours of 22 May 2016, four assailants murdered Emmanuel Arituha, who was the guard on duty that morning, and proceeded to break into the office building. Despite attempts to disable cameras and the alarm system, both remained functional and security camera footage confirmed the events. The offices of the executive director and deputy executive director were broken into and ransacked. The assailants broke open all the drawers and cupboards and combed through documents and files. They took away a number of documents some yet to be identified. They also took a certified copy of our Articles and Memorandum of Association. Surprisingly, computers, laptops and other electronic gadgets that thieves could easily take were all left intact including those near the window that was used to gain access to the main building. The police arrived at HRAPF at around 8:00am to investigate the crime scene. This was about two hours after they were first notified of the break in. They took samples of physical evidence like fingerprints, blood samples and CCTV footage. They only released a brief report after HRAPF insisted on the report. It basically stated that this was a robbery gone bad. No one was identified, arrested or charged or in respect of the murder and break-in.

3. What do you believe is the motivation behind these break-ins?

The motivation behind the attacks continues to be puzzling and unclear. After the first attack, the police concluded that it was a random attack by common criminals. However, for a random attack it would have been expected that the attackers would steal valuable items. However, in both attacks, computers, printers and other electronic gadgets were not taken, although they were very accessible to the assailants. There is therefore suspicion that the attacks are being used as weapons of intimidation. The reasons for this intimidation are however not known. For now, all this is speculative. All that we needed is the police informing us of their findings from the investigations and/or at the very least arresting and charging someone with the crime. The evidence was very clear and available.

4. What action will you take after this break-in?

HRAPF already demanded for investigations into the two break-ins. It is clear that since the assailants did not take anything from the offices, they are yet to find what they want and will be back. For this reason, HRAPF’s board and management have resolved to shift our operations to the premises of Old Kampala Police Station, the very station responsible for failing to investigate our cases or informing us of the findings from the evidence availed to them. As citizens, we shall not leave the police station until the police provides us with a comprehensive report. This will start on Monday 12 February 2018 starting at 9am and ending at 5pm until the police provides us with the report.

5. What is the general operating environment for civil society organization in Uganda in the last year?

The operating environment for civil society organisations in Uganda is very restricted and it keeps narrowing. The passing of the NGO Act (2016) and its regulations were a profound legal attack on the sector, as they contain provisions that restrict the establishment and operation of NGOs in Uganda. The State continues to treat the sector with suspicion and continues to view its work as work that undermines the government. There have been several attacks on the sector, which have not been properly handled by the state, and the state continues to accuse the NGOs of “attacking themselves”. The operating environment is therefore narrowing and the state has not only overtly opposed civil society organisations, but has also implicitly refused to offer them protection.

The international civil society can stand in solidarity with Ugandan organisations in condemning these attacks and the state continued narrowing of civic space; make reports about these incidents and publish the information; and lobby their governments and power brokers to put pressure on their counterparts in Uganda to protect and support the civil society sector.